“Breakthrough” Fuel Cell Could Advance Widespread Use of Fuel Cells

"Breakthrough" might be a loaded word to use when describing alternative energy sources, which always seem to be just beyond reach, but Machine Design uses it to describe a new type of fuel cell from Georgia Tech.  There, a team of researchers under Principal investigator Meilin Liu developed a new fuel cell that runs on methane at temperatures comparable to automobile engines. The key to developing this fuel cell was the discovery of new catalyst.


The catalyst does away with [high-]priced hydrogen fuel by making its own out of cheap, readily available methane. And improvements throughout the cell dramatically cooled the operating temperatures customary in methane fuel cells. Methane fuel cells usually require temperatures of 750 to 1,000°C. The Georgia Tech fuel cell needs only about 500°C—a notch cooler than automobile combustion engines, which run at around 600°C.

That lower temperature could trigger cascading cost savings in the ancillary technologies needed to operate a fuel cell, potentially pushing the new cell to commercial viability. The researchers express confidence that engineers can design electric power units around this fuel cell, something that has eluded previous methane fuel cells.

Fuel cells and the circus of trying to put them in cars (which have never been sold at a profit) are not new topics around this blog.  I'm always trying to keep an eye open for new technologies that might change the dynamics of the field and turn the "$100k car they can sell for $40k" into something more practical. As I said a while back:


I'm not suggesting that nobody works on these things, that's how big breakthroughs happen, I'm just suggesting the odds for that aren't very good and that those R&D projects should not get funded out of tax money.

This new catalyst fuel cell could be the real thing.  The transition from laboratory to production is famously difficult and a lot of ideas die along the way.  Back to Machine Design for the gritty details:


The research was based on a type of fuel cell with high potential for commercial viability, the solid oxide fuel cell (SOFC). SOFCs are known for their versatility in using different fuels. If the new fuel cell goes to market, it still might not power automobiles for a while. Instead it could first land in basements as part of a more decentralized, cleaner, cheaper electrical power grid. The fuel cell would be about the size of a shoebox, not counting the other equipment needed to make it run. 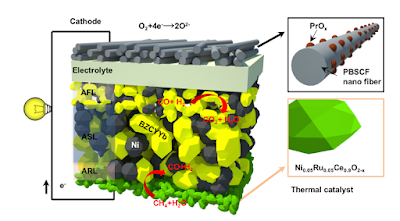 Cascading innovations, including a brand new one, let researchers reimagine the fuel cell, making it run on methane at lower temperatures. The ruthenium-nickel based catalyst, here in green, was the latest materials innovation in the new fuel cell. (Credit: Georgia Tech/Liu lab)

“The hope is you could install this device like a tankless water heater,” Liu says. “It would run off of natural gas to power your house…That would save society and industry the enormous cost of new power plants and large electrical grid expansions.

“It would also make homes and businesses more power independent,” he adds. “That kind of system would be called distributed generation, and our sponsors want to develop that.”

Hydrogen is the best fuel for powering fuel cells, but its cost is exorbitant. Researchers figured out how to convert methane to hydrogen in the fuel cell itself via the new catalyst, which is made with cerium, nickel, and ruthenium and has the chemical formula Ce0.9Ni0.05Ru0.05O2 (abbreviated CNR).

When methane, water molecules, and heat contact the catalyst, nickel chemically cleaves the methane molecule. Ruthenium does the same with water. The resulting parts come back together as hydrogen (H2) and carbon monoxide (CO), which researchers put to good use. Although CO causes performance problems in most fuel cells, in this one they can use it as a fuel.

H2 and CO move on to other catalyst layers that make up the anode, the part of the fuel cell that pulls off electrons, making the carbon monoxide and hydrogen positively charged ions. The electrons travel via a wire creating the electricity flow toward the cathode.

There, oxygen sucks up the electrons, closing the electrical circuit and becoming O2 ions. Ionized hydrogen and oxygen meet and exit the fuel cell as water condensation; the carbon monoxide and oxygen ions meet to become pure carbon dioxide, which could be captured.

The ability to create its needed hydrogen out of methane is very strong advantage for this fuel cell.  Among the drawbacks of current fuel cell-based cars are the high pressure hydrogen tanks involved; one source said the Toyota fuel cell vehicle is using 11 lb tanks at 10,000 PSI.  Assume that about half the hydrogen is replaced with air, and you get a nice explosive mixture with an energy of around 300 Mega Joules (MJ) - equivalent to about 300 sticks of dynamite or nearly nearly 80 lbs of TNT.  Fuel tanks over 11,000 MJ are being planned for trucks.

This fuel cell looks to be able to eliminate the hydrogen tank.  Whether it can be "safe" or not is going to involve a lot of engineering.  I always assume that anything capable of producing or storing energy is potentially unsafe, from the gallon gas can for the lawnmower to the starting battery in a car, to smaller batteries, too.