I get a rocketry-oriented weekly mailing from Ars Technica called the Rocket Report.  This week's report links to a story that NASA plans to launch a safety review of SpaceX and Boeing.  They link to the source of the story as the Washington Post, so perhaps not the most credible source in the DC swamp.  The Rocket Report editor has an interesting take on the story.


What is really at play here? ... This was an interesting development. We have heard several reasons for this, from NASA wanting to perform a CYA review in case something goes wrong with these commercial spaceflights to, (more plausibly in our opinion) an effort by a few Congressmen to detract from SpaceX's efforts to win the race to the commercial crew launchpad. Remember, there are people in Congress who don't like commercial crew in general and SpaceX specifically. We're told NASA human spaceflight chief Bill Gerstenmaier did not view this review as necessary but was not really in a position to resist.

The Washington Post leads with the angle that some widespread videos of Elon Musk smoking pot are the reason, as if the behavior of their carney barker CEO would be a better indicator than their track record as commercial launch provider.


The review was prompted by the recent behavior of SpaceX’s founder, Elon Musk, according to three officials with knowledge of the probe, after he took a hit of marijuana and sipped whiskey on a podcast streamed on the Internet. That rankled some at NASA’s highest levels and prompted the agency to take a close look at the culture of the companies, the people said.

NASA spokesman Bob Jacobs declined to comment on what prompted the review. But in a statement, he said it would “ensure the companies are meeting NASA’s requirements for workplace safety, including the adherence to a drug-free environment.”

NASA Administrator Jim Bridenstine said in an interview that the agency wants to make sure the public has confidence in its human-spaceflight program, especially as the companies are getting closer to their first flights, scheduled for next year.

So why does Boeing get lumped into this if it's related to Musk's sometimes frankly bizarre behavior?  This supports the idea that it's really due to some people in DC not wanting to relinquish power to the private sector.  (Where "power" equals budget$ and $pending).  You might recall a story from 2016 reporting that then-NASA chief Charlie Bolden was opposed to private space operations.


Bolden was asked for his opinion on the emerging market for small satellites and launchers. He chose to respond instead with his thoughts on NASA's own rocket, the Space Launch System, and private-sector development of larger launch vehicles.

To be sure, Bolden is gone and doesn't matter anymore, and it's not the case that everyone agrees with this view.  Lori Garver, a deputy administrator of NASA from 2009 to 2013, has been quoted as saying that perhaps NASA should stop dumping money into development of the heavy lift SLS and use commercial options like the SpaceX Falcon Heavy or BFR.


"The question is really, why would the government continue to spend billions of dollars a year of taxpayer money for a rocket that will be unnecessary and obsolete?"

ARS Technica reporter Eric Berger pointed out that while the Falcon Heavy can't necessarily lift the payloads of the SLS, it's an incredibly cheap heavy lift rocket and NASA would save serious money by taking advantage of what it can do.


For the sake of argument, consider the costs of this three-year delay against the lift capability NASA could have bought by purchasing Falcon Heavy rockets from SpaceX in 2018, 2019, and 2020. That $7.8 billion equates to 86 launches of the reusable Falcon Heavy or 52 of the expendable version. This provides up to 3,000 tons of lift—the equivalent of eight International Space Stations or one heck of a Moon base. Obviously NASA does not need that many launches, but it could buy several Falcon Heavy rockets a year and have the funds to build meaningful payloads to launch on them. [Bold added - SiG]

So it seems to me this "safety" review is a cover for a "trying to come up with reasons private sector launch vehicles shouldn't be used" review.  Here's the thing no one's talking about: NASA doesn't really build rockets, so anything that's claimed to be a NASA booster would be built by Boeing or another contractor like SpaceX anyway.  To borrow a phrase, NASA people are the Only Ones capable of handling manned space flight safely.  They've had the special, magical, government competency dust sprinkled on them. 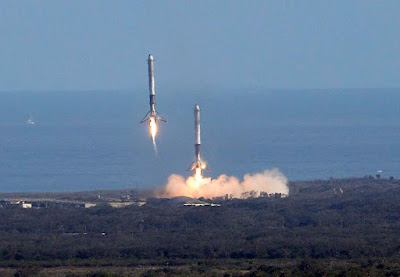 One of the highlights of the Falcon Heavy test launch was the landing of the Heavy's two boosters back on the Kennedy Space Center, near the launch complex they left from.  They were offset in time deliberately for the aesthetics of seeing them landing like this.