NASA Chief Not A Fan of Private Space Companies

In an interview quoted in ARS Technica, NASA Administrator Charlie Bowden said he doesn't think it's the place of companies like Elon Musk's SpaceX and Jeff Bezos' Blue Origin to be developing heavy boosters.  At least not yet.


On Tuesday, during a Q&A session at the American Institute of Aeronautics and Astronautics' Space 2016 Conference, Bolden was asked for his opinion on the emerging market for small satellites and launchers. He chose to respond instead with his thoughts on NASA's own rocket, the Space Launch System, and private-sector development of larger launch vehicles. 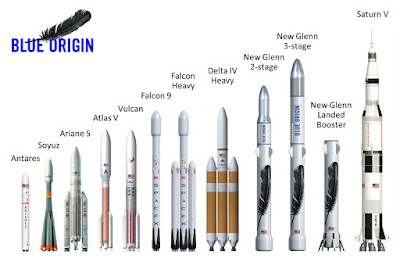 In this graphic, courtesy of Blue Origin, they show the relative sizes of the launch vehicles compared to our 60 year old standard for large launch vehicles, the Saturn V.  All of these vehicles are currently flying except the Falcon Heavy and the two Glenn versions (and, of course, the Saturn V).

You'll note that the Falcon Heavy and the Glenn are in the class of the largest launch vehicles that exist, with both being projected to launch 70 metric tons to low Earth orbit (LEO).  It also means two private US corporations are planning rockets that will compete with the biggest things NASA has ever built, including its proposed Space Launch System.


The key difference, of course, is cost. Development of Falcon Heavy and New Glenn will cost US taxpayers nothing, or next to nothing, in direct expenditures. Per-flight costs will probably be roughly on the order of $200 million per launch.

The space agency, however, is expected to spend $13 billion on design and development of SLS and its ground systems alone through its first flight in late 2018. An estimate by Ars suggested that it will cost NASA about $60 billion for 20 launches of the SLS rocket through the 2030s.

Read that as $200 million per launch with private sector vs. $3 billion with NASA, and I'm not completely clear that doesn't include some development costs.  But don't worry, it gets worse for "Muslim outreach" Bowden.


Despite the demonstrable efforts by both SpaceX and Blue Origin, Bolden nonetheless said that "normal people" cannot, or do not want to, develop large launch vehicles. What the administrator appears to be asserting here is that NASA is more special, or better, than those in the private sector when it comes to building rockets. This exceptionalism is curious, considering that NASA hasn't actually built a rocket since the 1970s and the space shuttle and that the SLS is highly derivative of shuttle components, including its engines and side-mounted solid rocket boosters.

It's also unclear why Bolden would not be a "fan" of commercial investment in large launch vehicles. Both SpaceX and Blue Origin, at their own expense and risk, are seeking to build heavy lift rockets that will augment the launch capability of the United States. Both companies have developed brand new engines (the Merlin 1D by SpaceX and BE-4 by Blue Origin) at a time when a major new rocket engine hasn't been brought forward in the United States in decades and when US national security offices must rely on Russian engines to deliver their spy satellites into space.

You'll also note that both SpaceX and Blue Origin are planning on reusability of their first stages, and both companies have successfully recovered them.  SpaceX was scheduled to launch their first reused rocket before the end of this year - which will be the first rocket ever reused for a paying customer - when their pad explosion occurred and grounded their program.  NASA's SLS is fully expendable; nothing comes back.  Just like the Saturn V.

Bolden's attitude, surprising as it might be to rational folks like you, me and the writers at Ars, is not unusual.  NASA's (and Bolden's!) former Deputy Administrator Lori Garver said in a November 2015 talk,


“The NASA people would say, ‘Come on Lori, you’ve got to talk to Elon because we got out of low-Earth orbit. We’re giving him that, but you’ve got to get him out of long-term, deep space, because that’s ours,’” Garver recalled. “I thought, fundamentally, you just don’t understand. We’re not in a race in a swimming pool where everyone is racing against one another. We’re in a cycling race where the government is riding point and the others are drafting behind us, and if someone comes alongside us and can pass us because they’ve found a better way, we don’t get out our tire pump and stick it between their spokes.”

She said it best, perhaps, when she made this observation.


“NASA was a very symbol of capitalist ideals when we went to the Moon and beat the Russians,” she said. “Now what we’re working with is more of a socialist plan for space exploration, which is just anathema to what this country should be doing. Don’t try to compete with the private sector. Incentivize them by driving technologies that will be necessary for us as we explore further.”

You might imagine she wasn't terribly popular at NASA.   She "made more than a few enemies in Congress and at NASA. She stepped on the toes of center directors. She got crosswise with the astronaut corps. And she didn’t always play nice with NASA’s traditional aerospace partners, who expected fat contracts from the space agency but also flexible deadlines."  NASA, though, long ago became an arthritic bureaucracy incapable of much beside shuffling papers; an insider told me, back in the '90s, that the miracle of NASA was that despite all the road blocks put in the way, they still managed to accomplish things.  It's a shadow of its former glory days in the 60s and 70s.  It still has the infrastructure, which translates into NASA centers in many congressional districts, which inevitably translates into money being passed around in DC.  For dinosaurs like Charlie Bolden.

Personally, I think Bolden is afraid that one day in eight or ten years, he'll be watching SpaceX astronauts landing on Mars on TV, while the SLS and NASA are still bound to LEO.