Bill Bonner reports seeing the Financial Times on Monday, and being shocked to see the admission that all of the central bank legerdemain of the last decade has failed.


Meanwhile, we were shocked to see in the Financial Times – yes, the “pink paper,” no less! – a sensible article on current central bank policies.

Our heart raced. Our pulse sped up. A light sweat gathered on our forehead.

What is going on? we wondered.

The Financial Times is the mouthpiece of the international Deep State. It is solidly behind Hillary… NATO… the EU… QE… ZIRP… NIRP… the phony credit dollar… and just about every other cockamamie perversion of civilized life.

And yet… there it was… in Monday’s edition. William White, head of the OECD’s economic development review committee:


The monetary stimulus provided repeatedly over the past eight years has failed […] Debt levels have risen […] Consumers have had to save more, not less, to ensure adequate income in retirement.

On the demand side, accumulating debt creates headwinds, leading to more monetary expansion and more debt […] On the supply side, misallocations slow growth, which again leads to monetary easing, more misallocation and still less growth.

Regular readers here will recognize this analysis. It's more or less what I've been pounding on in this space for the life of this blog (minus my constant whining about the need to return to a gold or gold-based standard for our money).  Here, I'm even more shocked than Bonner.  The Financial Times is singing my tune?

So what does the celebrated FT want?

More monetary policy!  More government spending!  More of exactly what they just finished saying wasn't working.  “No matter what we do, it's not working, so we just need to do it harder!”

This isn't out of character for the Financial Times, it's just quite a juxtaposition to see them explain the failures of what's been done for almost the last 16 years, and decide we need to do more of it.

Look, the central banks of the world have increased their purchases of the world’s assets to the point that they now own the equivalent of almost 40% of global GDP.  At their current rate (ignoring the FT's demand for “moar spending!”), they'll own half of the world's GDP in two more years! 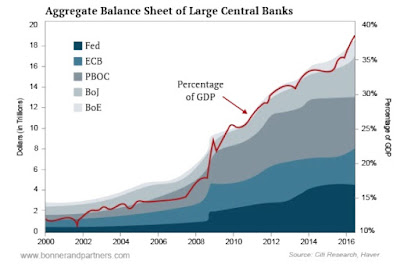 In Japan, the BoJ is buying up company stocks, but through Exchange Traded Funds, so it doesn't look quite so much like the bank is buying up all Japanese companies.  It's gotten to the point that the latest white collar crime in Japan is to create a fraudulent company and get some of that BoJ money.

Think about it a minute.  The governments through the central banks own all the public companies (and a lot of the private ones, too, as owners realize it's easier to sell out to the Feds at a profit than to try to beat them in competition).  Add in the drive to eliminate the $100 bill and we find government controls all major sources of credit, money, jobs, incomes, investment returns – everything. All we have is small bills… and not much of that. We can’t “store” wealth easily – the feds own most of the investments. And we’re not allowed to hold cash, except in the government’s banking utilities. Most likely, gold has been outlawed, too.

What kind of world is that? I think I remember hearing about something like that before... Of course! It's the way the Soviet Union was!  It's a nightmare.  And yet it seems to be the destination that every major force in society is pushing us.