Auburn University professor Peter Schwartz included a trigger warning on the syllabus for his class this fall, ENGR 2100 — Fundamentals of Engineering Mechanics.

The red text and bold font for "work" are used on the syllabus.

"I think trigger warnings are a joke to begin with and I wanted to see what one might look like in an engineering course. Looks kind of silly, doesn't it? That (sic) because it is," he said via email.

Which is why I'm blogging this:  it strikes me funny, too.  With the University of Chicago issuing a statement that they expect students to be mature enough to not need trigger warnings and safe spaces, this may be an idea whose time has come.  I come from a time and place where there was no such thing as a trigger warning.  Although this picture is from a much more recent time than I was in school, this was more like the reality in the world I come from: 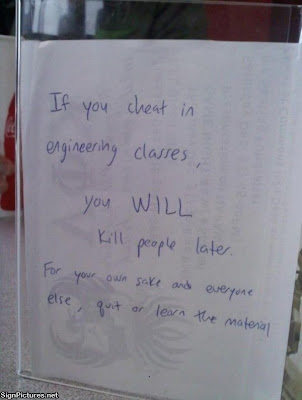 If something made you uncomfortable, well, too bad.  It's the material we're studying; if you can't bear to hear it or read it, you won't be able to learn it and you'll flunk out.  Nobody would rewrite the requirements of a class because a student was uncomfortable in it.