While sipping my coffee this morning, I was watching the annual ceremony of the reading of the names of the 9/11 victims in the WTC.  I don't know why it surprised me to see as much crying as I saw, but I was struck by how raw the wounds from that day still are.  From the way most mass media talks about it, it's like dim distant past, something the country is completely over.  Easy to say if it's not your loved one, coworker, or other friend that died that day.

In going over my years on this blog, I find I've written only a few posts on 9/11.  I suppose I try to contribute something that other people don't and with the superb writers that are here in the blogosphere, I'm not sure I have much to say that's worthwhile.  I find it's one of those few days in my life where I instantly can vividly recall where I was, what I was doing, and all of the things we saw and heard.

On that bright Tuesday morning, I was out of the office at a company that we contracted to do some testing on our radios.  As the technician and I were setting up the test, the company's secretary/receptionist came in and said the radio had a bulletin that an airplane had hit the World Trade Center.  My first reaction, perhaps strangely, was that radio navigation systems can't be that wrong, it must have been a terrible accident.  Act of war did not enter my mind.  As the morning went on, a TV set was put in place and large antenna hooked up outside (there are no local TV channels).  We watched the second plane hit and quickly realized this was no accident.  That's when the thoughts of Pearl Harbor and other acts of war started.  I've heard it credited to Ian Fleming as his character Auric Goldfinger, but the saying goes, "Once is happenstance, twice is coincidence, three times is enemy action".  And so it appeared that day.

In the days that followed, I learned that friends were affected by the events of 9-11, but weren't involved.  A co-worker was on business at Boeing, and had to rent a car to drive home.  A very close friend was waiting at JFK airport to fly home, and saw the attacks in real time.  He also had to rent a car and drive home.  A cousin lives within viewing distance and watched it. And now I have friends who have sons in the armed forces in Afghanistan, and others who have been in Iraq.  We need to remember we are at war, even if our enemy isn't a convenient nation-state.  You can pretend we're not at war if you'd like, but if someone swears to destroy you, it's prudent to believe them.

This post shouldn't be about me.  It's in memory of all those who died that day, and since then.  Let us really never forget.  This poster is several years old, but it'll have to do.  Remember the fallen. 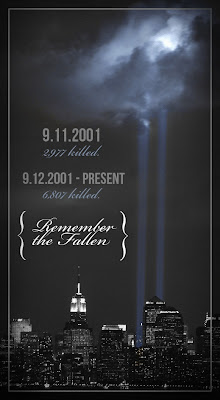 Posted by SiGraybeard at 8:42 PM