It has been two weeks since my last update to my shop project.  The work slowed for a couple of reasons, not the least of which was that I decided to implement an idea in the comments from Raven.   Raven said:


I built a very heavy duty pallet for my mill (2000lbs) and use a pallet jack to move it around when I need to. I don't worry about level on it at all. A real machinist would, probably, if the level plane was going to be used as a set up aid. But for a garage shop it seems to work. The problem with designing for the maximum space needed is that 95% of the time the mill will be working on a 6" piece,4% of the time on a 12" piece, and only 1% of the time on anything longer. Think about putting it on some heavy duty locking castors, so it can live in the 99% space and be pulled out for the long stock. 300lbs is not that much. 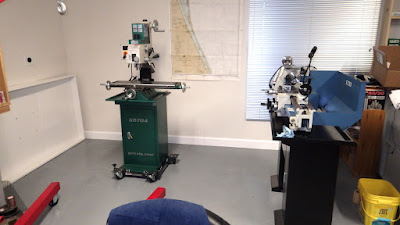 You can see the mill is on a rolling base, the one Grizzly sells for it.  You'll note the new wood drip pan is over against the left wall, and the lathe is rotated like in the shop layout in that last update.  While I was figuring out how to lift the 350lb lathe and base cabinets with the shop crane (those red legs on the left), the diminutive Mrs. Graybeard got behind it and found she could push it on the smooth floor.  Between the two of us we pretty effortlessly rotated the lathe 90 degrees to the direction it was, and slid it toward the right.  Guess that means I don't really need the mobile stand I bought for the lathe but hadn't put together.

The lathe is 30 inches from that window on the back wall, which should be ample room to put a barrel in the lathe should I need to do some sort of barrel work.  While there's enough room to get between the lathe and the mill with the drip pan in place, once the CNC build out is done, the mill will be pushed farther into that corner except for those times that I need to get behind it. 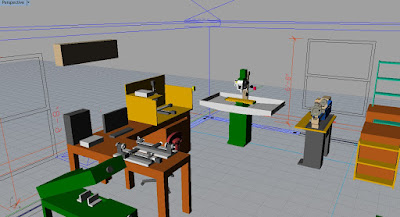 You'll note that there's a lot more detail in this view than there was in the previous post. I've spent much more time, perhaps too much time, playing with 3D modeling than I had before.  I found models of the Sherline lathe and mill online, then modified them to look more like mine, adding blocks to look like stepper motors where appropriate.  These models didn't have the Sherline motor and its control box.  Likewise the big lathe from Little Machine Shop is now more detailed.  I found a model of a "7 or 8 by" lathe online and stretched it until it was the dimensions I need.  This is not the kind of accuracy you need to make parts for the lathe, just show something other than the large yellowish box I had last time.  The bandsaw (front left) doesn't really look like a 4x6 bandsaw; it just looks more like one than it did last time.

The plan now is to go ahead and take the mill apart, then start swapping out the parts I made for the ones that are there.  This is where the adventure really starts, because if I did something wrong and need the mill to fix it, I'm SOL.  My big remaining jobs are:
Whew.  I wonder if I can get it done before my one year anniversary of retirement?