Not like that.  Unless Danskin came out with a line of workout unitards for walruses and needed a spokeswalrus.

I've spent much of the last week modeling the layout for the CNC controller box for the G0704 project.  My goal was to find any problems before I put it together, so that I minimize the amount of time I spend working on it.  Along the way, I've found lots of gotchas, big and small, so it hasn't been a wasted effort at all.  I've found I was missing essentials I should have, like wire.  I have a spool of #24, which is nowhere good enough for the high current lines.  I found models for several widely used parts online that would be really time consuming to do myself.  DB9 and DB25 connectors for example.  I thought it was done on Friday, and did this decent rendering of the box with everything in place but the wiring. 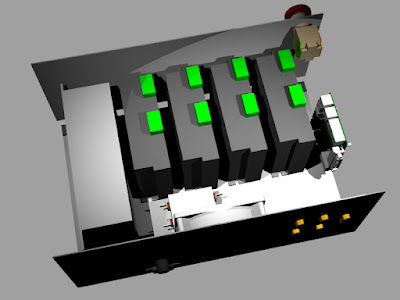 First thing to note is that the back of the box is at the bottom of this image.  The front is at the top and if you look on the left edge, you'll see that the front panel is floating in air, about a half inch in front of the bottom.  The bottom plate is bigger than what's shown here, but that extra space is unusable.  With that out of the way, the long box on the left is my 48V supply, the four identical black blocks with green blocks on top are the KL-6050 motor drivers.  Over on the right is the C35 BOB from CNC4PC.  There's a side panel that it mounts to which isn't visible here.  On the right side of the back panel, you'll see 5 orange blobs that are the DB25 for the printer port (right), and the four DB9 connectors which will carry the four voltage signals to the stepper motors.  Inside the back panel, around the middle, is a 120mm computer fan (AC power), and above it is a white block with brown spacers on it and flat terminals coming out of the ends; this is an EMI line filter.  These are supposed to keep electrical noise generated inside the box on the inside, and keep out electrical noise coming from the outside.  In the upper right corner is a beige block with a red knob on it; that's the emergency STOP! button.  It wires to the BOB.

With the pieces in place, including a spare motor controller for an additional axis, it was time to start figuring out where the holes go.  I wanted to produced dimensioned drawings of the front, back and bottom.   The more I looked at the details of how all of this gets hooked up, the BOB sitting on the sidewall kept being a problem.  It seemed like the only way around that was to make hand wired 25 pin printer cable extension about a foot long.  I figure that's painful at best, and probable outcomes just get worse from there, so I went shopping for a ready made cable under a foot long that I could squeeze in there.  Ribbon cable would be best because of its flexibility.  The standard interface on CNC BOBs has male connectors, so I'd need a male on the back panel to accept the cable, then turn that into a female to mate with the BOB.  The best I could find was a 3 foot standard printer cable, and that's not going to fit rolled up inside the box.  While searching, I found some hard plastic adapters that are designed for the same basic thing - DB25M to DB25F.  The problem there is I have to hard mount the adapter to the rear panel, which floats, and make sure the hard mounted BOB was in exactly the right place in 3-space so that they connect, including plugging together.  If I'm going to do that, the better approach is to cut out the back panel for the DB25 and mount the board to the back panel.  Only I can't; there's no hardware on the card to do that.

The answer is to make a right angle bracket that holds the board up, and allows the connector to poke through the back.  I have plenty of 3/8 aluminum a few inches wide, and drew a simple right angle bracket in Rhino.  Mrs. Graybeard was looking at it and started asking about why it was like that, so I explained it was just stuff I know I have and can make work, but I'm open to anything.  She goes out into the garage, rummages around in a storage tub of old computer stuff and comes in with a steel sheet mounting bracket for a hard drive.  One of these, to be precise.  It's actually going to be tight in there and I'm not entirely sure it will work, but I can cut that hard drive holder back on the bandsaw if I have to.  There's no bent portion to mount the bracket to the bottom plate, so a small piece of aluminum scrap will work for that.  I'll use 3/8" thick, about 1x3, so I can tap some holes in it to mount the bracket, and then mounting screws from the bottom to hold everything in place.

While looking for some small parts in my ham shack "junk box", I inadvertently stumbled across a way to drastically cut down the size of the components I'm using for handling the AC mains voltage. 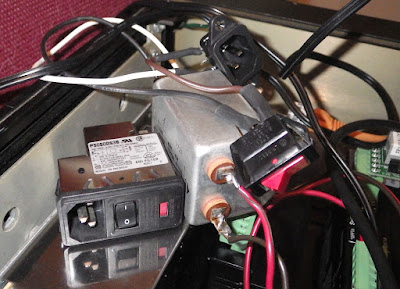 On the left is small metal box, 1 1/4" tall and 2 1/4" wide.  It includes an on/off switch, an AC line cord interface (the ones you'll find on many pieces of home electronics), a fuse holder (under the red rectangle) and a line filter.  That one little box takes the place of the pile to its right in this picture plus a fuse holder.  It also simplifies my wiring by reducing all those interconnections.  On closer examination, the one in this picture isn't really good for this box.  It's rated for 3 Amps at 120 through the filter, and I'm planning for more than that.  A new one rated for higher current doesn't cost that much, about $25 from Digikey.  It should ship pretty quickly.

So just when I thought I was done modeling the box, the box changed again.  A lot. 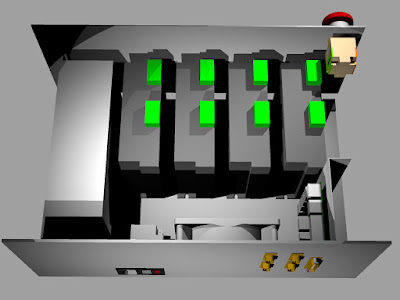 At the moment, I think this is done, but I thought that a few days ago.  I can start wiring up DB9 connectors for the motors, and figuring out how all this connects to the mill.  And I can start taking the mill apart to put the CNC conversion in place.  Then this can percolate in our minds and hopefully not change too much.

Still chugging along, a little bit every day.