I have never heard a single candidate say this, but Donald Trump has come the closest.  It's a simple two step approach to deregulation:  (1) all new laws are given an expiration date and (2) the CFR is to be gone through and laws eliminated. 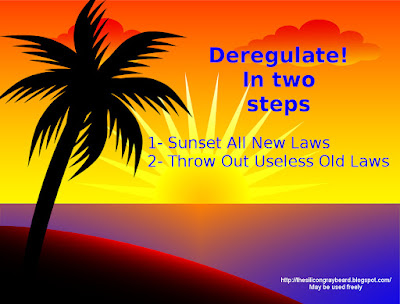 This will make liberals scream in agony.  I can hear the tired cliche's now: "Do you want to throw out food safety laws?  Do you want to poison people?"  With a CFR that numbers into the hundreds of thousands of pages, you can bet there are laws that are useless, or only used to entrap people who do minor things wrong.  I'm sure the CFR is like the states in that there still crazy laws on the books like that in Florida, it's illegal to have sex with a porcupine, and that in Alabama, it's illegal to keep an ice cream cone in your back pocket.

I've been harping on this idea for almost as long as I've been running this blog.  My most popular piece from the early days (2010) concerned how regulations are growing like weeds, how "Regulation and litigation are sand in the gears of society", and the costs of those regulations on businesses.  I repeatedly call for throwing out 2/3 or 3/4 of the Code of Federal Regulations.  Plus I've posted my "Tales from the Over Regulated State" series on an irregular basis 22 times, now.  Unfortunately, I didn't start numbering them until recently, so the numbers start with 18.

Trump has actually called for deregulation and talks about it fairly regularly.  I haven't heard him talk about throwing out "yuuge" chunks of the CFR, but from my standpoint, they might have to spend the next eight years undoing what was passed in the last eight.

This is actually the project I was working on yesterday.  I wanted to draw the scene, but my "first-grade level" art skills couldn't close to being this good.  Instead, I found this as Free Clip Art.  I'd be honored if other people agreed and spread this around.