This from Bill Bonner's diary, an entry called A Sure Sign the Economy is Doomed.  I'm not 100% sure you can read that link, but you should if you can.


“On Tuesday, German household-products giant Henkel and French pharmaceutical company Sanofi issued a total of €1.5 billion ($1.7 billion) of new bonds at yields of minus 0.05%.”

Nick might have added an exclamation point; never, in the last 5,000 years for which we have records has loaned money yielded less than nothing.

And since money didn’t even exist before that, we can presume that it has never before happened in the history of the universe.

Bill waxes poetic about all of the changes the world has seen in the last 5000 years, in which no one has ever loaned money to a corporation or bank and told them, "don't bother to pay all of it back".  I might say that to a friend, but if I'm buying bonds to help a company grow, that's money I could be spending on something else, and I'm paying the opportunity cost of not having my money to buy ...whatever I want, from pizza to more ammo.  I want the company to compensate me for that loss of the use of my money by paying interest on those bonds.  So I'm sure not buying those bonds.

The only way in which that makes any sense at all is the buyers are sitting on ludicrously large piles of money and think they'll lose more money by buying stocks or other instruments.  After all, if it was a small amount of money, the bank of Serta has even less loss.  It's just that billions of dollars require too many mattresses.  They know that government bonds are taking even more money than Henkel and Sanofil, and they think there's a bigger risk they'll lose more money putting it in a bank than buying those corporate bonds - which means they think it's more likely that the bank will fail and they lose everything or the bank will give them a haircut.  The Financial Times story puts it this way:


“Investors can park their cash in a higher-yielding instrument than is usually available,” said Rupert Lewis, head of European bond syndicate at BNP Paribas, who worked on both deals.

Two-year German Bunds yield minus 0.67 per cent, so the Henkel bond offers investors a premium of 52 basis points over the so-called risk-free rate on sovereign bonds. 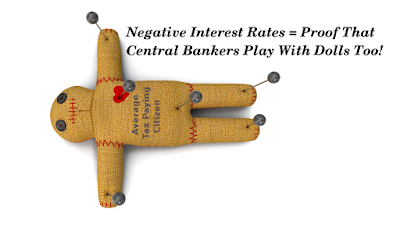