The second largest meteorite known to man was pulled out of the ground in Campo del Cielo, Argentina over the last weekend.   It's been named the Gancedo meteorite, after the small town nearest where it was found.  Campo del Cielo ("Field of Heaven") is a well known site among meteor collectors, and at any rock show you're likely to find some pieces of Campo del Cielo meteorites for sale.  Or just search on eBay.


Campo del Cielo is rife with iron meteorites estimated to have fallen around 4,000 years ago. What makes Gancedo unusual is its massive size, with a weight estimated at around 68,000 pounds (31,000 kilograms).

The Mail science tech page sums it up this way:


The original space rock weighed an estimated 800 tonnes and hailed from the Main Asteroid Belt located between Mars and Jupiter.

It split into multiple meteorites that branched out over an area of approximately 124 square miles (320 square kilometres).

Note that "space rock" is entirely wrong.  This is a iron-nickle meteorite, not rock, and they call it iron elsewhere in the piece.

With specimens going for around $1/gram on eBay, that's $31,000,000.  That's a joke, lame as it may be.  It's undoubtedly more valuable intact.  The largest known meteorite in the world is the Hoba meteorite in Namibia, estimated to weigh more than 132,000 pounds.  It has never been removed from the ground and is a tourist site. 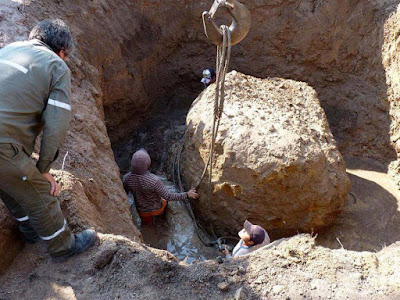 This is the Gancedo meteorite from Argentina.

You never know when something like this can hit.  All jokes about SMOD aside, a meteor of the size that resulted in the Campo del Cielo field is thought to be a once in "a couple" thousand years event meaning "we're overdue".  Could be tonight, or it could be in hundreds of years.