The Small Manufacturing Revolution Gets a New Tool

Over the years, I've written several times of the new industrial revolution.  It's called convergence.


With the advance of personal fabrication - the intersection of home CNC, 3D printing, continually more powerful digital electronics, what's called the Maker movement, it is literally getting to the point where you will be able to buy anything you need to make any gun you want. To use the cliche' again, "you can't stop the signal".

Just substitute "anything" for "any gun" in that paragraph because it really is that big.  For a new capability to add to that list of home CNC machine tools, and 3D printing, I'd like to direct your attention to Kickstarter, to the first desktop waterjet cutting machine, called the Wazer.  I don't usually link to Kickstarter, and no, I have no connection to the folks producing this, but the machine is revolutionary, and the project is completely funded (430% as of tonight) with 59 days to go.  Waterjet cutting machines have been known for being the province of major manufacturing companies, like the aerospace industry: large and expensive machines that require significant infrastructure and high maintenance.  This machine holds the promise of bringing waterjet cutting to the small shop and the hobbyist shop.

What is a waterjet cutting and why would one want it?  As the name implies, the cutting is done with a very fine, very high pressure jet of water.  Water, while erosive, isn't much of a cutting tool, so its charged with abrasive particles.  They use the term "garnet" for it: garnet is a moderately hard stone that has historically been used as an abrasive - you can still buy garnet paper.  It's a non-toxic, safe abrasive, just a harder version of the silicon dioxide sand in sandpaper. 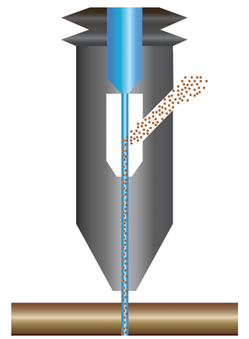 The abrasive particles allow the waterjet to cut anything from common metals like steel or aluminum, to titanium, glass, ceramics, carbon fiber sheets, and more.  Because it's a computer controlled machine (CNC), it can cut any shape outline you might want.  There are several interesting examples to look at on the Kickstarter page.  For metals, you might compare this to a plasma cutting machine, and there are home CNC plasma cutters, too.  The plasma cutters don't cut the materials like carbon fiber, fiberglass, glass or tile.

While this isn't directly up my alley, it's yet another example of how manufacturing is becoming more democratized.  Today, someone looking to start a home business that makes one-of, specialized, or personalized items, like the Studio Neat stand, has their choice of 3D printers in a bewildering array of sizes and capabilities, CNC machine tools or routers in a similarly bewildering array, small laser cutters or engravers for under $100, (or more capable versions that cost more, of course), plasma cutters and more.  This adds yet another tool to the small shop's domain.  It's the convergence of the digital revolution with improvements in motor manufacturing, and half a dozen other things.  It is the future. 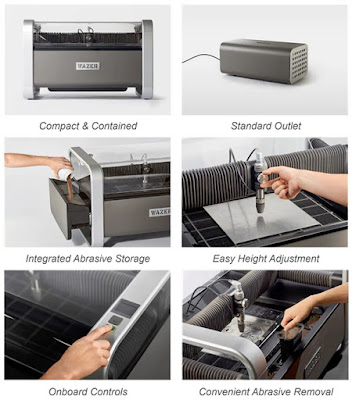