My Little Side Project

Back at the start of June, I posted a little piece about a friend gifting me a junk guitar.  It's a Breedlove that was made years ago and that apparently was some sort of a sales demo.  (There's a label inside that says it's an Atlas Series, and while I can find mention of that series in many places, no mention of when they were made.)  It was missing easily replaced pieces, and had a large chunk of the left side cut out of it so that potential buyers could see how it was made.  The original was an acoustic-electric with a nice electronics package that went away at some point over the years.

The idea is that it's about as broken as broken can be, so I can mess with it with complete impunity.  Pull frets to learn how to replace them?  Why not?  Crack the sound board to see if I can fix that crack?  Steam the neck off?  I probably can't break it worse than it is.   Naturally, I said, "sure I'll take it".

It has a solid Sitka spruce soundboard (top), which isn't that uncommon once you get past the very cheapest guitars; the back, though, is solid rosewood and that's something I expect to find only in fairly high end guitars.  The closest equivalent I know of on the market today seems to be the Fender Paramount PM-3 Deluxe at a K-buck.  The sides are rosewood laminate (plywood), but a guitar's sides are largely structural and don't affect sound very much. So while it has obvious problems, it's basically a good guitar, not one of those cheap, plywood guitars for beginners.  In other words, while it's a junk guitar, it's not a "junk guitar".

When I got it in June, I said:


My mental gears are turning.  I'm curious about how it sounds now.  I could get a set of tuners, nut and saddle and have it able to make sounds for under $100 - maybe half that if I use no-name parts. That's probably necessary, too.  I mean, I can't tell if I ruined a setup, or added a fret that buzzes unless I can get sounds out of it.  The foot long hole in the side will be a problem, but I can live with that.  Actually, several custom luthiers make guitars with a solid body and the sound hole moved up to the top edge, making this example an extreme version of this approach.

It turned out that the cost was way below $100.  $27.06  to be precise.  I bought a set of no-name import tuners on eBay for $8.06 - including shipping - and a pre-notched, nut and saddle made from "bone" for the other $19 (it doesn't say what the bone is from, but "bone" is a commonly used material for these parts).   I bought those parts before my medical emergency back in late June and they've been sitting.  I finally got around to installing them over the weekend. 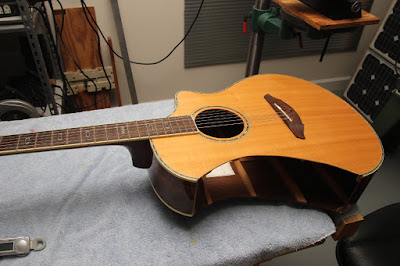 This view shows the "oversized top edge sound hole" as well as the bone saddle... 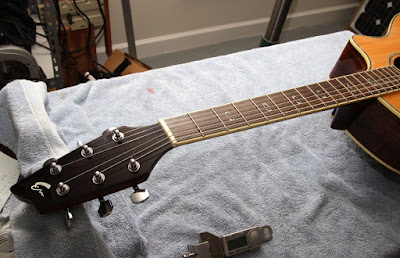 while this view shows the el-cheapo tuners and nut.

Perhaps unsurprisingly, it did require a little adjustment when I put strings on and tried to tune it up.  Certain notes around the middle of the neck didn't play; I'd try for the 6th fret and get the 7th fret note. The neck of a guitar is supposed to be slightly lower in the middle frets than at the nut or back at the body.  I just needed to adjust the truss rod a little to get it to play easily.  The rest of the fret board seems fine; no buzzing sounds which means the frets are probably fairly flat and level.  That's a little surprising in a demo piece like this was.

Just why they cut this one up is hard to know.  I mean, did they cut up QC rejects that were destined for the trash bin, were they pulled from regular production, or were they made especially for this purpose?  I was a bit afraid that when I put tension on the strings that the whole thing would collapse like so much cardboard; or, at least, the bridge would go flying.  Everything is fine, though.  It actually sounds pretty nice, even with that large chunk of side missing.  It points the sound up at me somewhat better than across the room, so I'm sure it sounds different from where I'm sitting than where Mrs. Graybeard is while I play.  Hey!  Not bad for $27.