Over the years, I've come to regard the Law of Unintended Consequences (LoUC) as one of a few things out of social sciences that rises almost to the level of physical law.  Contrary to what they say in car commercials, it's not possible to break the laws of physics, and no law, regulation or any change is immune to the LoUC.  While the LoUC isn't quantitative, it seems the concept of saying "all intended changes bring unintended consequences" is as rigid as saying "gravitation is a force between two bodies proportional to their masses and inversely proportional to their separation".

Where I'm going is a little story in Digital Photography Review, a weekly newsletter I get, that tells the story that the Jackson Hole travel and tourism board is asking visitors to stop geotagging photos.


As Vox recently pointed out in a video titled What happens when nature goes viral, geotagged photos have become a major issue for landmarks around the world. When photos posted to Instagram, Facebook, and other social networks are geotagged, knowingly or otherwise, it makes it easier than ever for new people to seek out the exact same location and have their own turn at taking a photo, only adding to the problem.

While it might not seem like a problem, the influx of visitors to many of these locations has caused a dramatic change in the environment, physically and otherwise...

The combination of the social media craze of taking pictures of yourself in remote and beautiful locations along with geotagging providing the exact location the picture was taken together invoked the LoUC and is causing damage.  These remote, beautiful places have seen increases in visitors they're incapable of sustaining — at least not without dramatic physical changes to the areas.  Sometimes changes to ensure the safety of these visitors, such as trying to keep the visitors from falling off ledges or cliffs. 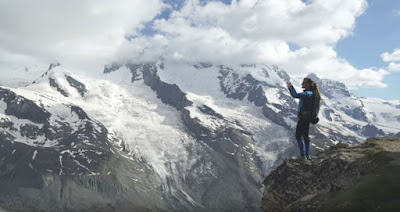 (A screen capture out of the Jackson Hole tourism board video)

In response the travel and tourism board has started a campaign to get visitors to not tag their location.  When offered a choice to tag their photo with, they get the option to add the tag, "Tag Responsibly, Keep Jackson Hole Wild."


'Every time someone captures stunning scenery and tags the exact location, crowds follow,' says the narrator in the above video. 'The traffic causes unintended harm to pristine environments, plants, and animal habitats.'

Sometimes users are completely unaware that their images are being tagged. Most phones nowadays feature automatic geotagging and although a number of image hosting sites and social networks strip the metadata, there are others that use it by default.

The thing about the Law of Unintended Consequences is that the effects are always obvious in retrospect; which means they should have been obvious before the initial thing that caused them.  In this case, someone should have foreseen that combining location tagging with social media's competition to get more likes and just appear to be a more awesome person would lead to crowds trying to emulate the first picture and flocking to the location. 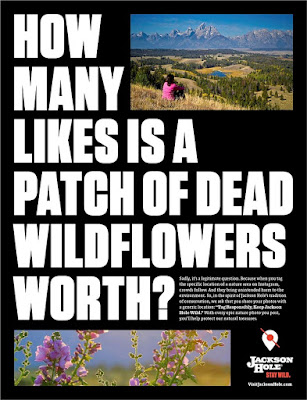 Posted by SiGraybeard at 6:00 PM