Perhaps the most hyped movie of this mid-winter movie season has been Aquaman, the latest in the DC Universe.  Aquaman appeared in last Spring's Justice League and introduced in the previous year's Batman v Superman: Dawn of Justice.  It opened in the US last Friday after a very big week overseas, essentially covering the costs of making the movie about 3 times.  'Tis the season to be busy and all, so Mrs. Graybeard and I got to our local cineplex yesterday for the 1:00 matinee to check it out.

Much like these movies have tended to do, the first official trailer dropped five months ago in July, and hints at the visual spectacle that the movie really is.  It really is a visual feast; the vast majority is supposed to be in several underwater nations inhabited by water breathing humans with abilities far beyond what "surface dwellers" have.

The story is, well, a stereotypical kid's book story like others you've heard many times before.  Call it the out of place, nerdy kid who's unknowingly the heir to an all-important throne.  Arthur Curry is a half breed: his father was a lighthouse keeper and his mother the soon-to-be Queen Atlanna of Atlantis who runs away from her arranged marriage and goes ashore.  His mother, (Nicole Kidman), tells him as he's growing up that he could be the "chosen one" to unify the surface dwellers and the undersea world.


When the story is kind of a trope story, you need likable characters you want to watch.  Aquaman (Jason Momoa) does good brooding looks and good fight scenes (which seems to be what they want from him) but doesn't do much for the quieter scenes.  The female lead, Mera (Amber Heard), was better at a wider range of emotions and you can watch her change as the movie goes along, getting more drawn to Arthur.  The other principal characters, such as Arthur's half-brother, King Orm, his trainer Vulko, and King Nereus, were kind of one-dimensional backgrounds - almost NPC to use that new term.  So you need exciting visuals to keep your attention.  Like mounted Atlantean troops on sharks. 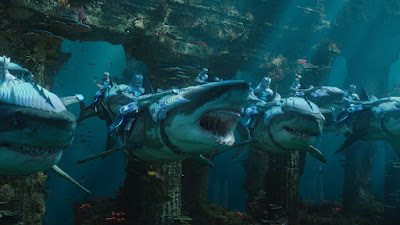 (Photo courtesy of Warner Bros. Pictures here, but you knew I didn't put that together myself to claim it as my work).

The movie was honestly pretty average.  Spectacular CGI visuals, but otherwise kind of "meh".  On IMDB, their audience rating is about 75% and that's about where I come down.  I can't say I was looking at my watch the whole time but I sure wasn't lost in the fun. One thing I found annoying was that the Atlanteans and other underwater nations were going to wage war on the surface dwellers for pollution and "crimes against the sea" (my words not theirs).  Sorry, but that trope is worn out, too.

Maybe I'm becoming immune to superhero movies.  Or, God forbid, developing higher standards.  But wait!  Captain Marvel is due out in March!  That'll be here before we know it.  This summer we get Godzilla: King of the Monsters, a "classic" (formulaic) Godzilla vs. Mothra and all the other monsters from those Grade B Japanese flicks of the 60s.  The link between the Marvel and Godzilla universes is that in the King Kong movie from '17, Kong: Skull Island (which is part of an 8 year story arc to this summer's Godzilla movie and a Godzilla vs. Kong movie in two years), the mandatory pretty girl was Brie Larson who is going to be Captain Marvel.  She played opposite Tom Hiddleston and Samuel L Jackson, who play Loki and Nick Fury from the Marvel movies.  Coincidence? 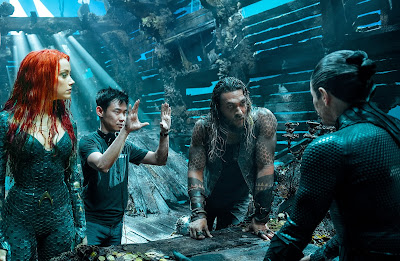 Director James Wan (the guy with this hands up) working with Amber Heard, Jason Momoa and Willem Dafoe  in a scene supposed to be in "air bubble" deep underwater.  One thing I think James Wan got right was that he let their hair look wet and bedraggled, as if they just got out of the water, instead of having everyone look like they spent a half day in high end hair salon.