After A Year Without Net Neutrality

One year after the end of the FCC Chairman Ajit Pai ended the Obama-era Commission's (illegal, IMO) power grab of implementing "net neutrality" after being ordered by congress not to do so, we were supposed to have seen the end of internet.  We were supposed to be sitting in dirt-floored hovels reminiscing about how there used to be this marvelous thing called "the Internet" where we could get the answer to any question we ever had, buy any exotic oddity we might ever want, and watch all the pirated movies cat videos we could ever want.  Internet use was going to collapse to zero because the Evil Corporations were going charge by the Megabyte, and data plans were going to be priced where only tech titans and billionaires could afford them.

In reality: not so much.  The typical internet speeds have actually gone up in the last year, according to an article in Wired, highlighted in the Washington Examiner.


The Internet is actually faster in the United States. A new report by Ookla, a sister company to PC Magazine, shows that download speeds have increased 35.8 percent across the country.

For the technophiles, note this is for fixed downloads.  Mobile devices tend to be slower.   The fastest Internet was reported in in Kansas City, Mo., where Google Fiber is concentrated.

The outrage expressed last year over net neutrality being revoked is almost comical - as are most of the "outrage of the week" stories, when we can look in hindsight.

This is an egregious attack on our democracy. The end of #NetNeutrality protections means that the internet will be for sale to the highest bidder. When our democratic institutions are already in peril, we must do everything we can to stop this decision from taking effect. https://t.co/8GGrJFMdrU
— Bernie Sanders (@SenSanders) December 14, 2017


GLAAD feared gays and lesbians would be targeted.


Planned Parenthood weighed in for whatever reason.

The @FCC just voted to repeal #NetNeutrality rules — that required internet providers to treat all web traffic equally. This could make it more costly to access content or even block websites or information entirely.
— Planned Parenthood Action (@PPact) December 14, 2017


For their part, Wired has basically changed from saying, "the sky will fall!" before the Net Neutrality rules were revoked to saying "the sky hasn't fallen yet" implying they expect it to fall once the Evil Internet Providers figure out how to screw everyone without losing too many customers.  What they neglect in this analysis is that the largest providers were behind the Net Neutrality laws - they probably wrote most of it, in a true cronyism deal like most of the Obama years.  If the laws are going to keep those Evil Providers from making big profits, why would they be behind it?  Could it be to block competitors from getting started?

Another reality they don't talk about is that with the exception of the original ARPANET predecessor to the internet, which was largely paid for by the DARPA, (the Defense Advanced Research Projects Agency), the vast majority of the internet was built out by those same providers.  Providers are trying to keep up with exploding demand for their product.  There's an insatiable thirst for more bandwidth, but providers have to make a profit on what they're doing to invest in the future.  Their problem is that some services overwhelm all the others.

Borepatch, who I consider a rather well-informed guy, said that fully 50% of traffic on the 'net is from two services: Google (mostly YouTube) and Netflix.   If Net Neutrality's "all bits are equal" is law, that means that when the service is busy, providers will have to throttle Netflix and YouTube to allow email to get through, and other low criticality services like writing blogs or swapping recipes.

See, back to cat videos after all that. 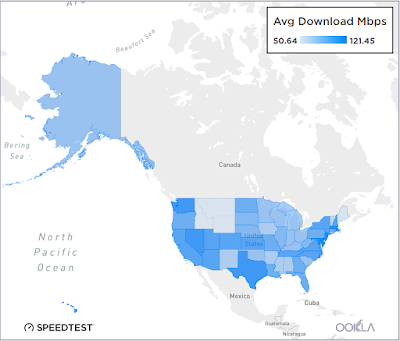 Average download speeds across the US, from OOKLA, via PC.