The Perfectly Legal Corruption No One Cares About

That's the title of a column by Derek Hunter on Townhall today.  Excellent article but maybe 1/100th as long as it could be.

The media is in a tizzy over the lawfare framing of General Michael Flynn, attorney Michael Cohen, and everyone else being ruined by the Robert Mueller investigations.

General Flynn had been the head of the Defense Intelligence Agency, the DIA, so surely he must have known the stakes in talking with the FBI, even though they said it was just a chat so no need for a lawyer.  Surely that must be what they call a perjury trap: if you remember one detail wrong, one detail that doesn't match the transcripts (again, transcripts that Flynn must have known they'd have) or remember one thing differently than someone else has testified, you're guilty of perjury.  Even if you're right and the first guy was lying.

Like Derek Hunter, it's hard to care much less than I do about Trump paying off a couple of whores to keep silent about having sex with him 12 years ago. He wasn't president at the time, he wasn't even running for office.  He was "just" another New York City billionaire - a private businessman.


What I don’t like is when people whose salaries we’re all paying use more of our tax dollars to pay off people they’ve harassed and keep that quiet.

There have been more than 260 settlements costing more than $17 million, paid for by you and me, so our elected Members for Congress can avoid being held responsible for things they’re now clutching their pearls over the President having done with his own money.

The use of public tax money for the same thing, by elected congressmen and senators, is disgusting, reprehensible and vile.  It should have never been allowed - just like allowing the same senators and representatives to engage in insider trading and other things "normal people" will get arrested for should never have happened.


California Democrat Maxine Waters won her first term in Congress in 1990 with 79 percent of the vote. Her toughest reelection bid came in 2012 when she squeaked by with 71 percent. Yet every two years she raises a campaign war chest for that foregone conclusion.

With the millions of dollars she’s raised, Waters has paid her own daughter, Karen, more than $800,000 since 2004 to run a statewide mail campaign promoting other Democrats. This past election, where Waters took 75.8 percent of the vote, was a good year for Karen too. According to the Washington Free Beacon, “Karen is now owed $183,022.15 on top of the $108,000 she has already collected during the midterms.” Nice pay for essentially licking stamps.

Missouri Democrat William Lacy Clay Jr. was first elected in 2000 with a scant 75 percent of the vote. His closest reelection bid was in 2002 when he only managed 70 percent.

With his reelection a mere formality, he won this year with 80.1 percent, Clay still managed to slide a substantial chunk of his campaign cash to his sister. Michelle Clay is a lawyer who lives in Silver Spring, Maryland, a full 809 miles from Congressman Clay’s district. The Free Beacon reported, “From Jan. 4 until Oct. 31, 2018, Rep. Clay Jr. disbursed numerous payments ranging from $500 to $10,000 and totaling $198,500 to his sister's firm.”
...
[Last year, retiring] congressman Luis Gutierrez (D-IL), who paid his wife almost $400,000 between 2010 and then. That’s a nice nest egg to add to a Congressional pension, isn’t it?

These Members of Congress are not unique, and it’s not a scam limited to one party, and most disturbingly, it’s not even a crime. When you set the rules, the rules are always in your favor.

And that last paragraph is the problem.  It's not limited to one party and it's not even a crime.  These stories are only scratching the surface.  As soon as one scam is clamped down on (remember the congressional check-kiting scandal of 1992?) they come up with another.  They can always find a legal way to steal money. 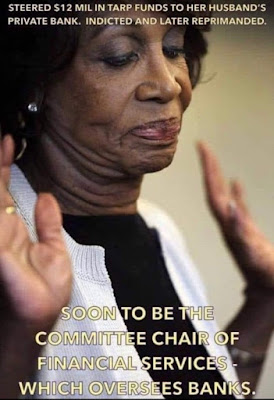 (Nominated to chair - not sure it's a done deal yet, but "elections have consequences" you know)