The Stupid Is Strong In This One

I don't ordinarily make fun of the stupidity of common criminals, but sometimes I can't resist.  Let's face it: most people don't become criminals because of their stellar work ethic and phenomenal reasoning skills.  Sometimes the resulting stupid is so extreme it makes you laugh.

GAT Daily posts a story that leads us to the story on ABC News about a Houston girl who blew off her heel while trying to shove an AK-47 down her pants.  That she didn't own (the AK; we don't know about the pants).  Apparently, she and one or more friends stole the gun and then were playing with it.  In the street.


A Texas teen shot herself in the foot with an allegedly stolen AK-47 that she had stuffed down her pants, according to police.

Police responded to the scene of the shooting in Harris County on Tuesday at around 4:15 p.m. They found three teens: two 17-year-old females and a 16-year-old male.
...
“We have found out since then that the gun that was used was stolen in a home burglary just hours before that shooting,” [Harris County Constable Mark] Herman said.

These stellar young citizens reacted in true bonehead fashion.  The 16 year old male grabbed the AK-47 as his friend is lying in the street screaming in pain and shoved the gun down a storm drain.  When police arrived, neighbors were on the scene trying to help the girl and the boy told police it was a drive by shooting.  Neighbors told the police that wasn't true and pointed out the storm drain the gun was ditched into, where it was recovered.


Video obtained by ABC News affiliate KTRK shows a girl lying on the road and neighbors coming to assist her.

“She had some pretty good wounds. She blew off the heel of one foot,” Don Sievertson, a 68-year-old veteran who ran out to help the girl, told ABC News. “She was in excruciating pain and she had every reason to be. She had very severe wounds, very severe.

“She was thrusting backward and forward, side-to-side screaming in pain and you know, [saying], ‘I need help.’”

The story at the "Video Obtained" link says she shot herself more than once.  They go on to say the girl is in critical condition in intensive care, so they are indeed serious wounds.  Shooting off one's heel is an injury that will probably bring lifetime difficulties.  My first aid experience doesn't specifically include that kind of injury, but I wouldn't think of blowing off the heel or most of the foot as life-threatening.  Maybe one of the other injuries nicked the femoral artery?

Various charges have been filed against the boy and this girl with more pending, possibly to include the second girl.  GAT Daily has a good summary. 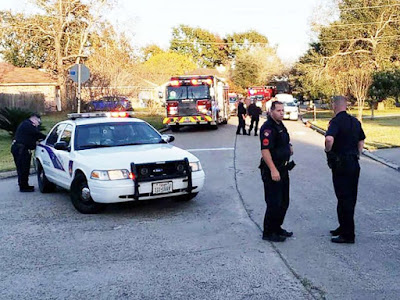