A Different Look at the Drone Problem

Several of us bloggers have addressed the problems that remotely controlled aerial drones are bringing, with most of the conversation about hobbyist-level nano drones.  Peter Grant at Bayou Renaissance Man (for example) has been sounding the alarm on this for quite a while and others have talked about it, too.  I haven't done much.

Much of this was academic discussion until the Gatwick airport service disruption last week.  Drones flying over the airfield interrupted schedules on Wednesday and Thursday, affecting 120,000 people.  John Robb at Global Guerrillas posted on this, giving details on the disruption and drawing the lessons that people dedicated to causing chaos and disruption get out of the event.

I had an email last Friday asking if I thought it was possible to jam the drones and take them down.  I said that when the dust settled from Christmas that I'd take a deeper look but that yes, as a general rule, any radio link can be jammed if you're willing to spend enough resources.  If you're in charge of protecting a major airport, you should be spending that.  On the other hand, if you want to disrupt the airport while making your drones jam resistant, there are very likely ways around the jamming. 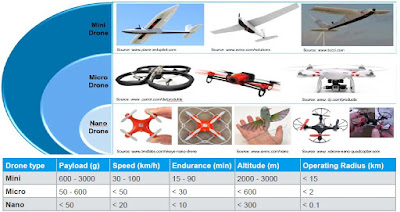 The types of drones and their characteristics.

Jam resistance is achieved by using modulation modes that are less susceptible to jamming.  For example, conventional FM is easy to jam over a limited area by putting a signal on the transmitter's frequency.  I worked in an engineering lab once where one of the engineers hated another guy's favorite type of music.  Every day at lunch, he would tune a signal generator to the FM broadcaster's frequency, put a short wire antenna in the output connector and turn up the generator's output.  FM has what's called a "capture effect" where the stronger signal dominates the audio output and the unmodulated carrier from the signal generator silenced the audio output of the other guy's radio.

AM behaves differently and both the jammer and desired signal show up in the audio.  All the signal generator could do is reduce the output audio volume.  More advanced modulation techniques, broadly called spread spectrum, are more resistant to jamming.  (Spread spectrum is when the signal's spectrum is much wider than the bandwidth needed to carry the information) Making your signal jam resistant has a good analogy to making a house more secure.  You can do things to harden your home, but a determined attacker can still get it.  You can spend more money and make it harder to get in, but you haven't made it impossible to get in, just much harder.  Likewise, an attacker determined to spend any amount to make a signal jam resistant has a better chance than someone who can't spend very much.  Cheap consumer electronics isn't going to be as jam resistant as military systems.

What I needed to find was the methods the nano drone market uses.  It turns out, one of the test equipment and instrumentation giants in electronics, Rohde & Schwarz, published a white paper you can read online or download (pdf warning) with just this sort of information.   This chart is a good summary. 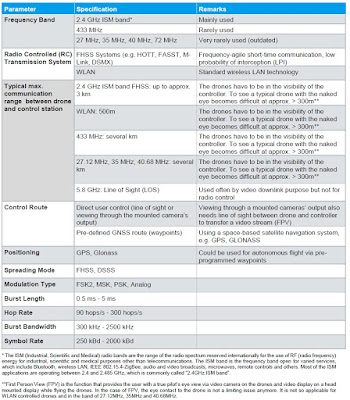 The implications from the chart are that cheap hobby drones are most likely to use the 2.4 GHz ISM band (Industrial, Scientific, Medical) - better known as the WiFi band.  They use Frequency Hopping Spread Spectrum (FHSS) or Direct Sequence Spread Spectrum  (DSSS).   FHSS is sending the information spread over different channels and then the channels are "reassembled" in the receiver.  DSSS spreads the information across both frequency and time.  (explanation)  FHSS WiFi is fairly easy to jam, and cheap WiFi jammers are widely available - cheaper than a low end cellphone.

It implies that something that transmitted noise in the 2.4 GHz ISM band could jam the drones.  It would also jam every WiFi link in the area.  That would not be popular.

There's a bigger problem.  What if the drone is not being controlled by some dork in the weeds at the end of the runway, but it's flying a GPS path programmed into it?  Hobby drones can do that.  Besides that, what if the drone is being flown by that dork and then you jam it.  Then what happens?  Does it land because it's no longer getting commands or does it have the GPS coordinates it took off from and now goes back to them?  Going back along the line of flight would be a good safety procedure; assuming the drone has lost the signal simply because it went too far, have it fly back where it last had a useful signal.  GPS can be jammed.  That would cause the drone to be lost and perhaps land but jamming GPS would cause a major impact in the area.

Just because you jammed the signal doesn't mean your problems are over.  Besides, if the drone operator is really trying to get their payload past whatever you can do, perhaps they could just change the radios to something they can get that isn't as likely to be jammed.  The more non-standard it is, the better.  That table says 5 GHz WiFi is used on drones - so it's too common.

Because of problems like this, there's an emerging and apparently fast growing industry in anti-drone technologies.  Different technologies are being featured in a "dog fight" over who gets market share.   Aside from that Rohde-Schwarz paper, Skydroner out of Singapore and Droneshield of Australia are examples of companies emphasizing physical security for your factory or other facilities.

Low cost drones are becoming a real security concern - during Trump's inauguration, the FAA closed the air space over DC, including closing to drones.  There's no reason to think "drone free zones" work any better than gun free zones.