In Other Update News

Besides the LED ceiling lights, I've been working on something else that's based on a light, an Infrared LED: my CNC threading hardware.

But first, a quick summary.  This morning, before the bulbs got here, I pulled the circuit breaker for the fluorescent fixtures, then took the bad fixture down.  I took pictures of both ends and the circuit diagram on the ballast, in case I needed that info, cut the wires at the ballast and took it out, leaving lots of spare wire (easier to cut it off than add it).  Then it was time to wait for the bulbs.  Thankfully, they came right after lunch and I was able to get it all done pretty quickly.

All in all, it went smoothly.  I'll say there was only one of the normal goofs that always seem to creep into projects.  When I was reassembling the light, I broke one of the terminals (tombstones) off on one end.  Rather than take the fixture down again, I taped the tombstone in place and then reinforced it with RTV.

When I turned on the breaker, it was noticeably brighter in that corner.  I have a light meter and held it under the fixture. Something like 1600 lux.  Cool, but what does that mean?  I went over to the nearest T8 bulb fixture and got about 800.  Looked up and saw the step ladder in front of me that I had stood on to change the fixture and it morphed into a "calibrated" (or consistent) test fixture while I watched.  Long story short, here's the reading with the sensor on the top of the step ladder directly under the fixture (about 3').  I didn't move the sensor around and attempt to peak the reading, just put it up there.

When I bought the package of four tubes, I assumed that I'd keep the other two for the next fluorescent fixture that died.  Mrs. Graybeard noticed the improvement in light in that corner and said I should upgrade the fixture closest to the machine tools.  I have a lot of additional lights in that corner, including three clamp on reflectors with 100 W equivalent LED bulbs in them, and an LED Spot Light.  There's almost no such thing as too many lumens when you're doing close, detail work.


Moving to the Lathe, when I first put the system together it didn't fit the way I designed it to.  This led to puzzlement for several days as I measured all the parts and found they were correct.  Then I realized the model I had designed it to fit wasn't the same size in one critical dimension as my lathe.  The effect is that the phototransistor comes up short of the interrupter disk by about 2/10 of an inch.  This will be fixed with something like a thick washer or something very low tech like that.  Over the weekend, it became time to lash everything up and see if I got pulses.  The scope immediately said it looked like it was doing what it's supposed to do. 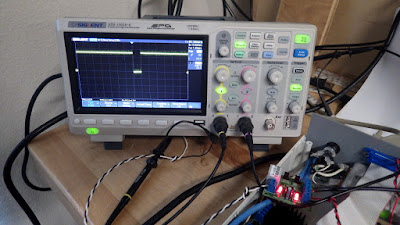 The scope trace is the low-going pulse every revolution (1 Pulse/Rev) on the black and white wire pair that will go to the interface board.  The CNC4PC board is in the air above the interface board.  This is ready to mount everything permanently, button it up, and try to coax the hardware/software combination into cutting threads.

You can see my Sooper Excloosive, High-Tech, Mounting Techneek here: 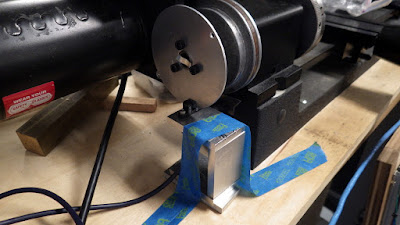 Bet you ain't never seed no CNC machinery built with painter's tape like this!