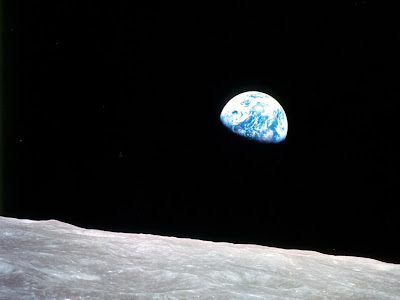 Apollo 8 was originally not conceived as the mission it became; it was intended to be part of qualifying the Apollo spacecraft in Low Earth Orbit (LEO).  There had been only one prior manned Apollo mission, Apollo 7, and that had been only two months before in October.  While a Saturn V had been test launched, it had never carried astronauts into orbit.


"NASA officials realized that this was risky, since Apollo 7 had not yet qualified the spacecraft when their tentative decision was made," a NASA historical document reported. The decision was further complicated by Apollo 8's need for a more powerful rocket, called the Saturn V, which had never been tested on a crewed launch. But after months of discussion, NASA decided to move forward with an Apollo 8 moon mission on Nov. 10, about a month before the launch.


All that remained was the return trip home. Mission controllers waited anxiously Christmas morning as the crew turned their engine on again, on the far side of the moon.

As they re-emerged, Lovell called out, "Please be informed, there is a Santa Claus," signaling that the ship was headed back to Earth. The crew landed successfully on Dec. 27.

A cursory look through the blog history looks like I've written about Apollo 8 every year, but only on Christmas Eve.  Christmas Eve was the day they orbited the moon, the day that the crew spoke to us of the "stark and unappetizing" look of the lunar surface and read from the book of Genesis, the first book in the Christian bible.  Here on Earth, 1968 had been a tumultuous year. There had been riots in many places, assassinations and troubles all around the globe. On Christmas eve, in awe of what these men were doing, it seemed like the world held its breath and watched.