In an academic, partially removed-from-reality sense.

I found an interesting article this week from Daniel J Mitchell's blog International Liberty.  The article, posted December 18th, concerns the damages that increased marginal tax rates cause.  The article, World Bank Study Confirms the Ever-Increasing Damage of Ever-Increasing Tax Rates, begins by discussing the concept of deadweight loss, which shows the portion of the market for a product that gets lost because of taxes.  There's an excellent video here that explains this chart (it's a graphic they develop). 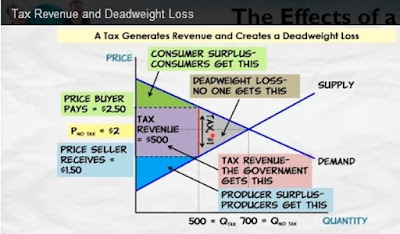 Now mentally reduce the tax rate.  That makes the purple box shorter from top to bottom.  That, in turn allows the right end of the box to extend farther to the right before it simultaneously intersects the supply and demand curves, reducing the deadweight loss.  Conclusion: Lower taxes allow more economic activity.  Now mentally increase the tax rate, making the box taller and bringing the intersection back to the left.  Conclusion: higher taxes allow less economic activity.

Less obvious is that the curves don't move linearly.  That is, if you double the tax rate, you don't necessarily double the revenue.  You increase the amount of deadweight loss which could cut off sales completely, or more than likely create black market ways to avoid the taxes.  As Mitchell says:


Simply stated, if a tax of X does Y amount of damage, then a tax of 2X will do a lot more damage than 2Y.

This is the core economic reason why even left-leaning international bureaucracies agree that class-warfare taxes are so destructive. When you take a high tax rate and make it even higher, the damage grows exponentially.

Given this, it's interesting to see supporting evidence from the World Bank (of all places) published this month.


…studies have used the narrative approach for individual or multi-country analyses (in all cases, focusing solely on industrial economies, and mostly on industrial European countries). These studies find large negative tax multipliers, ranging between 2 and 5. This recent consensus pointing to large negative tax multipliers, especially in industrial European countries, naturally entails important policy prescriptions. For example, as part of a more comprehensive series of papers focusing on spending and tax multipliers, Alesina, Favero, and Giavazzi (2015) point that policies based upon spending cuts are much less costly in terms of short run output losses than tax based adjustments.

A natural question is whether large negative tax multipliers are a robust empirical regularity… In order to answer this highly relevant academic and policy question, one would ideally need to conduct a study using a more global sample including industrial and, particularly, developing countries. …This paper takes on this challenge by focusing on 51 countries (21 industrial and 30 developing) for the period 1970-2014. …we focus our efforts on building a new series for quarterly standard value-added tax rates (henceforth VAT rates). …We identify a total of 96 VAT rate changes in 35 countries (18 industrial and 17 developing).

The World Bank study showed that VAT taxes were more destructive to developing economies than to established economies, BUT that the deadweight loss was greater in the established countries because the initial tax burden was higher; in other words, "they already had big gray boxes".  The World Bank authors include this pair of data plots from trying to determine how much raising VAT rates affect the incentives to work (left) and incentives to invest.  It shouldn't be a surprise the raising taxes reduced both the incentives to work and to invest. 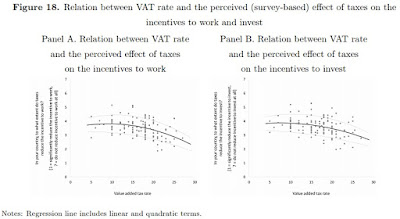 
The moral of the story is that all tax increases are misguided, but class-warfare taxes wreak the most economic havoc.

P.S. Not everyone understands this common-sense observation. For instance, the bureaucrats at the Congressional Budget Office basically argued back in 2010 that a 100 percent tax rate was the way to maximize growth.