An interesting article came in my email this week.  Retail giant Walmart has long been know for having some additional kiosks (at least as they appear around here) in the fronts of their stores.  These include hair salons, restaurants, banks, Starbucks franchises, and optometry offices.  Our local Walmarts have had pharmacies for as far back as I can recall, inside the main body of the store, but optometrists and those others tended to be along the front of the store, near where the checkout lanes are.

Now, one Walmart in Carrollton, Texas, is getting a mental health clinic as well.

Over the years, I've heard people who are close to having an actual addiction to shopping refer to it as "retail therapy".  This puts a whole new light on that saying.

According to the Foundation for Economic Education, the arrangement is based on something closer to a market-based system, rather than the typical model for all other health care where no one knows what anything costs.


Since the clinic opened less than three weeks ago, over 500 prospective patients have come in to talk with representatives and learn more. Interested consumers can expect to pay $140 for the first appointment with additional visits costing $110. This cost is drastically lower than other therapy services available in the marketplace, where an uninsured person can sometimes pay upwards of $200 per visit. For consumers who are experiencing extenuating circumstances, Beacon also offers a sliding fee scale to help make these services accessible to everyone.

It's likely to be a start of a spreading trend and more involvement in health care for Walmart.


When it comes to improving general health care, Walmart is just getting started. The company announced that it is going to make cutting health care costs a priority. Putting this plan into action, the company recently hired former Humana executive Sean Slovensk to head up its health and wellness division.
...
The company recently partnered with Anthem, one of the largest insurance providers in the country, to offer discounts on medical equipment and over-the-counter drugs to Medicare patients. And all this is being done without government compulsion.

It's often noted that the leftists are often opposed to Walmart, but Walmart has done more to improve the lives of the "little guys" the leftists supposedly care about than any government anywhere in the world.  They are ruthlessly free market.  I've known engineers that have been involved in proposals to Walmart corporate headquarters and I've heard stories that I can't verify.  Let's just say Walmart apparently cuts their own costs as ruthlessly as they ask vendors to cut their costs.

One of the reasons Walmart wants to help cut health care costs is that health care for their employees is the second largest expense on their profit/loss ledger, right behind wages.  From their perspective as sellers of Pretty Much Everything, they see that if their customers didn't have to spend as much on health care they might have more to spend at Walmart.  That sort of corporate greed, backed by the resources of one of the largest retailers in the country, might be able to make a difference.


“So these are the things that drive us to be interested in health care: Our customers need help. Our associates need and want to be healthy. And it’s good for our business,” [Walmart executive Lori Flees] said.

Frankly, I see other potential private sector moves to cut health care costs and improve access and it's nothing but good.  More from CNBC, back in October.


Walmart’s competitors are also investing in health care. CVS Health wants to add more options at its retail clinics, known as MinuteClinics, once it closes its acquisition of health insurer Aetna. Walgreens is testing a number of partnerships, including one with UnitedHealth Group to add urgent care centers to some drugstores.

Walmart earlier this year was looking to deepen its partnership with Humana, people familiar with the matter told CNBC. Flees said partnerships are “an essential part” of the strategy to lower the cost of health care and to improve the health of the country.

“If you take the expertise that lies in the industry and you combine it with Walmart’s footprint, it really is an opportunity to have a positive impact at scale,” she said.

The more government involvement there is, the worse things get.  We need more freedom, more market. These companies can't completely unscrew things themselves, state and local governments can always screw things up more, but it's a hopeful sign. 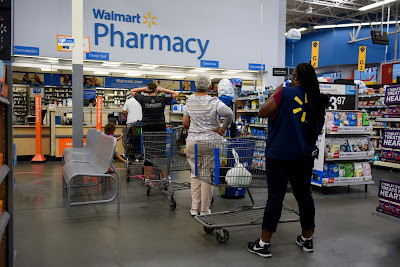