File this under "Simple Things That Aren't Simple".

Back in 2014, we added a big room onto our house which has become my playground.  Mostly my playground.  Yes, it shares space with things from the rest of the house, but this is where my metal shop is, where my gun cleaning and reloading benches are and where general wood and other projects get done.  When the addition was done, we had a general contractor oversee everything and the electricians he brought in installed six fluorescent light fixtures.  Mounted to the ceiling, not hanging from chains, the six fixtures are two T8-size bulbs: four feet long and (mumble mumble)

A couple of weeks ago, when I turned on the lights in the shop, one of the fixtures didn't turn on.  Most everyone has seen a fluorescent go bad and are familiar with the flickering and light/dark waves in the tube they get.  That never happened: it was fine then completely dead the next morning.  When that has happened to me in the past it was because the fixture's ballast had failed.  I measure voltage into the ballast, but nothing on its output.  Replacing the bulbs with others I have lying around shows other bulbs won't light, either.

It was time to dive into the world of replacing the fluorescent tubes with longer-lived LED tubes.  It turned out to be quite a morass.  My expectation was that I could buy a replacement, ceiling-mounted light fixture with LED bulbs for perhaps twice the price of a shop light with fluorescent tubes.  The only thing I could find near that price were lights that are metal fixtures with LED strips mounted inside them, making the lights not replaceable.  If you had to change the LEDs, you would need to change the entire fixture. The lights I could find in the home improvement stores were more like four times the cost of the hanging shop light.

These lights are rated for 45 to 50,000 hours of life, and if I'm using them around 10 hours/day, 50,000 hours is over 13 years.  It is reasonable to want to change those bulbs when we have no real idea what technology light fixture might be set to replace it in 13 years?  Maybe its OCD, excuse me: CDO, but I kept going down that path.

I started searching for LEDs, in tubes, that could replace my T8 fluorescent bulbs.  Last April, when I replaced my halogen kitchen lights with LED bulbs, I had done my shopping at a company called 1000Bulbs.  I popped over there and found I could get two bulbs for $3.25 each, but there was a catch.  I needed to buy a pack of 25 to get that price.  There are 16 bulbs in the house.  With a 50,000 hour lifetime, about 13 years, 25 bulbs is a lifetime supply.  Or two lifetimes.  In the box of 25 they were $3.25 a piece.  In single quantities, quite a bit more than that - like $8.  (Not the same exact bulbs as the quantity discount, just what they listed).

It's a long story, but I eventually found that the most common LED replacements are powered only at one end, one pin for each power lead, and naturally called "single-end" LED bulbs.  That's what these $3.25 bulbs were.  Size wise they go in the same fixture and they have two inert pins on the other end just to support the bulb.  To use those, I'd need to rebuild my fixture - it's not hard, but would be best to take the fixture down and put it on a workbench.  The fixtures have the terminals (colloquially called tombstones) on both ends with the pins tied to each other, called shunt wired, so I'd need to take those out on the end that gets powered and replace them with tombstones that have the two sides wired separately.   This diagram should help: 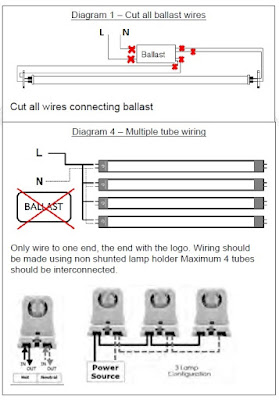 Shown at the top is the starting condition, the Line (or Hot) and Neutral wires come into the ballast in the fixture.  The ballast has two pairs of wires, two blue and two red, that go to the tombstones on either end.  All of those wires are cut and the ballast removed.  Those shunted tombstones (built into the fixture) are removed and replaced with two new ones that have separate black and white wires.  The wires are connected to each other (black to black, white to white - which are shown gray in my hacked picture, next)  then the Line or Hot (black) wire from the house goes to the black sides of the tombstones and the Neutral (white) goes to the white sides.  The wiring diagram on the bottom of that picture is trying to tell you tie all the blacks together and all the whites together, never connecting black to white.  I can't find anything that definitively said that it mattered to the bulb which pin got black and which got white, but it might be labelled on the bulbs. 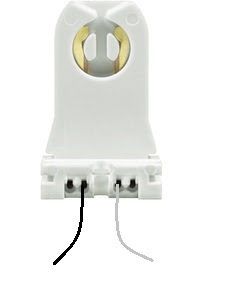 Remember that this is 120 Volts AC and 120 kills more people than any other voltage widely distributed.  If this is out of your comfort zone, don't do it.


Somewhere along the line, I found there were double ended LED replacements.  Those would go in the same fixture, but with no need for new tombstones.  In fact, you don't even need to take out the ballast if it's good (yeah you waste 8 or 10 watts in the ballast if you leave it in, so it does impact your electric bill slightly).  Problem was they were out of stock.  Another LED seller I went to was out of them, too.  These would be easier to wire in. 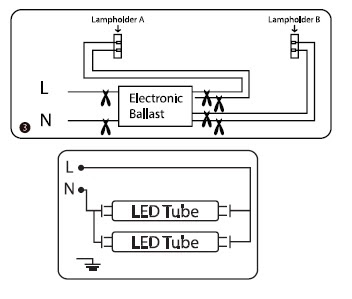 In this case, you cut out the ballast, then take your hot wire (L) and tie it to either of the ballast's output wires, the blue or the red pair.  Finally, you tie the neutral wire (N) to the other color pair.  This has the advantage of not requiring you replace the tombstones (although they're cheap if you get them online) and not having to mess with adding more wiring.  To echo what I said about the single-end installation, I've seen nothing that says one end or the other of the tube needs to be L or N, but it might be marked on the bulbs themselves.

A visit to the local home improvement centers had no options whatsoever, so this time I went to search on Amazon.  They had a four pack of double-end lamps that were frankly more than I wanted to pay, but they had good reviews and to be honest, I was pretty tired of the problem.  I have a dark corner in the shop that needs new bulbs and this looks like it will get me there with the minimum of blood, sweat and tears.

This blew entirely too much time over the last several days - and since I'm retired, I know I have more time than many of you.  The bulbs are supposed to be here tomorrow.  With luck, they'll be here well before 6 PM and I'll be able to get right on it.