On my last post about efforts to get this perfected, back on the 19th, I showed some completed threads and said there was more I wanted to do besides the threading, but that the threading portion was almost done.  Among those things was to put a few turns of a fine pitch thread on a piece, like some of the parts I had to make for the flame eater engine.  I did that on 21st.  This pic shows that short aluminum piece (from 12/21) alongside a longer cold rolled steel piece cut manually (by changing gears on the lathe) back over the summer.  Call that five turns of 4-40 threads, 1/8" long, on a the end of a stud that's 3/16" long. 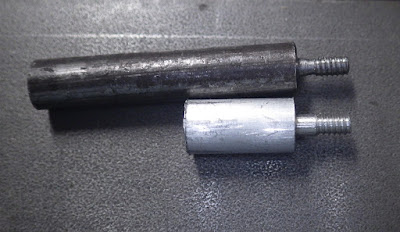 So that major goal was accomplished, and to be honest that's probably the sort of threading I'm going to be doing.

In that last post I had commented on how ratty the 10-32 threads looked.  I did a second, longer piece and it came out pretty ratty looking, too.  This montage shows the one from the last post, in aluminum, and the second one in brass. 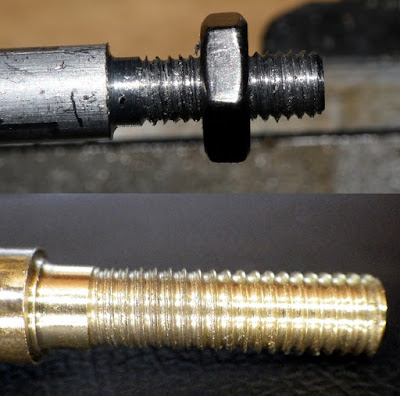 If you look to the left of the nut in that top picture, you can see that one thread looks like it's cutoff along the mid-line.  Pretty much all of the threads on the left are misshapen.  Same thing with the one on the bottom, cut in brass the next day.  On this one you can vividly see what looks like at least a couple of different cuts going on.  Fixing this became the focus of my troubleshooting.

Along the way, I found that my CNC control program, Mach3 does not adjust its feed rate during a pass.  It samples the rotation speed (RPM) from my sensor just before it starts a cutting pass, calculates how fast to move the cutter and then does that.  The effect of that is that the errors would show up like this: the longer the cut, the more inches vary when you're setting inches/minute.  I noticed when I was first putting together the optical sensor that the speed did wander.  On my oscilloscope, it looked like jitter in the pulses: some wider (slower RPMs) and some narrower (higher RPMs).  I couldn't see a way to regulate the motor's speed any better, but I do have a manual lathe that uses the same headstock, so I did a head transplant.  The RPM variation got smaller.

Time for another sample. 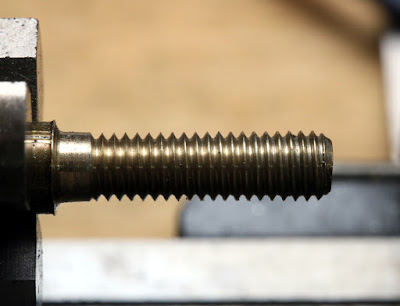 If you look at the left end of this piece compared to those two above, the difference in the thread quality is night and day.  A commercial nut was a little tough to get started but threaded on and fit great after the first quarter inch of thread (the threaded length is either 0.6 or 5/8" long - I forget).

All cutting produces enough force to deform metal away from the cutter, and that piece is long in terms of length to diameter ratio, just over 3:1.  I tried a couple of ways I have to support the end of the rod, a live center and a dead center.  The live center spins on ball bearings while a dead center is just a tapered, pointed piece of steel that rests in divot in the end of the screw and keeps it from moving sideways as much.  The live center was too big in diameter and the cutter hit it.  The dead center would fit, but was too short to reach the screw.  I had no way to support the screw while cutting.

A way to remove this sort of variation in a straight cylinder you've cut on the lathe is to do a "spring pass"  you move the cutter back across the piece and it cuts off (most) of the metal that acted like a spring and compressed under the cutter the first time.  I had been cutting the screw with two spring passes.  Today, I increased it to 10 and watched closely under magnifiers.  Sure enough, I could see the screw bending away from the cutter when it was at the right end of the screw.  As the machine went through the spring cuts, I could see it take more metal from the right end than the left. 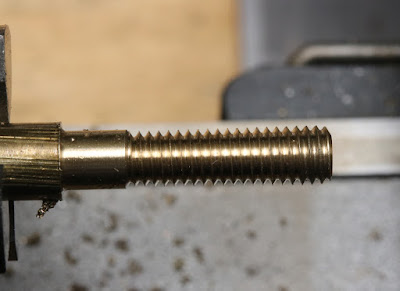 This one is a bit more subtle but if you compare the right ends of this screw and the previous one, you can see that only the first couple of threads look flat topped.  Sure enough, the commercial nut goes on with a little difficulty on the first couple of turns and then feels pretty normal.

What to do?  I suppose the straight forward solution is to get or make a longer center to try to lock the end of the screw in place while I cut.  Perhaps I do even more spring passes.  Twice as many as threading cuts?  Either way, this is much closer to Done.  It's not relevant for the kind of pieces I was thinking of when I thought of moving threading from the gear-driven setup to "software defined gears", but with the capability of cutting virtually any thread, there's no reason not to make it as good as possible.