Still Not as Much Bull as the Evening News

It's a story about a steer, and a steer is an ex-bull by way of castration.  Typically done for ease of handling more than meat yield, as I understand it.  I've never even spent a day on a farm, let alone lived on one, so anyone reading here who has lived on a farm knows infinitely more than I do.

That's a long way of saying there's no bull in this story:  meet Knickers, the largest steer in Western Australia. 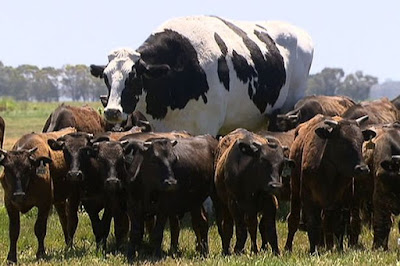 (Knickers surrounded by a herd of Wagyu cattle. )


Knickers weighs 220st and stands at a massive 6ft 4inches tall - but his mammoth size means he gets to live out his days roaming the fields in Western Australia.

His owner Geoff Pearson tried to sell Knickers at auction last month but meat processors said they couldn't take him as he's just too big.

Knickers is a Holstein Friesian but is far taller than other cows from the same breed.

It's actually an accident (serendipity from Knickers' standpoint) that they held onto him and he continued to grow.  He was used as a 'coach' which is a steer that leads other cattle.  Knickers, though was a standout as a coach (go ahead and say it: "he was out standing in his field") judging by how the other cattle liked him and readily followed him around.  Some of the cattle about the same age as Knickers have already had their appointments at the abattoir with Grim Reaper, but Knickers' size got him a reprieve.

Knickers' name - think of the slang term for women's panties - comes from his owner joking around.  Seems when Knickers was young they had a Brahman steer, another breed of cattle, which was a friend of the young calf.  Since they tended to call the Brahman "Bra", they thought "Bra and Knickers" was a natural combination.

I guess you've got to take your jokes where you can find them.