NASA's Lucy mission to the Trojan asteroids of Jupiter launched successfully early this past Saturday morning, but after deployment of its two enormous solar panels, one has not reported successfully latching into place.

Combined, the two solar arrays have a collecting area of 51 square meters. Such large arrays are necessary because the spacecraft will spend much of its 12-year journey about five times the distance of the Earth from the Sun. Lucy's solar panels can only generate about 3 percent of the energy at a Jovian distance than they can at Earth's orbit around the Sun.

A rule of thumb number to remember is that the sun delivers around 1300 Watts per square meter to the top of Earth's atmosphere.  The 3% value they quote is 39 W/sq.m., and the 51 square meter array would give the spacecraft 1990 Watts every hour at those distances.  Lucy is traveling farther from the sun for a longer mission than any previous satellite that was completely solar powered.  Earlier satellites commonly used Radioisotope Thermal Generators, RTGs.

The other way to think about this issue is that if it's designed to run on 3% of what's available in Earth orbit, it's got 33.3 times that right now while they troubleshoot the issue.  On Lucy's NASA project website to watch, they note:

Lucy’s two solar arrays have deployed, and both are producing power and the battery is charging. While one of the arrays has latched, indications are that the second array may not be fully latched. All other subsystems are normal. In the current spacecraft attitude, Lucy can continue to operate with no threat to its health and safety. The team is analyzing spacecraft data to understand the situation and determine next steps to achieve full deployment of the solar array.

This is yet another example of the saying that "space is hard."  Lucy is in an escape orbit and beyond the reach of any other spacecraft to help out.  The mission controllers are on their own.  I should point out that they said, "indications are that the second array may not be fully latched."  They still need to determine it's actually a problem with the latching and not the circuit that measures whether or not the latch is properly set.  If the sensor or circuit is bad, it's annoying but not a show stopper.

Lucy is an interesting mission that seems totally academic.  The mission is to the Trojan asteroids, orbiting at the LaGrange points of Jupiter, ahead of and behind Jupiter itself.

The $981 million mission will fly an extremely complex trajectory over the span of a dozen years. The spacecraft will swing by Earth a total of three times for gravitational assists as it visits a main-belt asteroid, 52246 Donaldjohanson, and subsequently flies by eight Trojan asteroids that share Jupiter's orbit around the Sun.
...
Lucy will fly by its first asteroid target in April 2025, a main-belt asteroid named after Donald Johanson, the American anthropologist who co-discovered the famed "Lucy" fossil in 1974. The fossil, of a female hominin species that lived about 3.2 million years ago, supported the evolutionary idea that bipedalism preceded an increase in brain size.

The mission itself is named after that fossil Lucy as well.  It's a fanciful name, but these asteroids themselves are considered to be old fossils from the formation of the solar system. 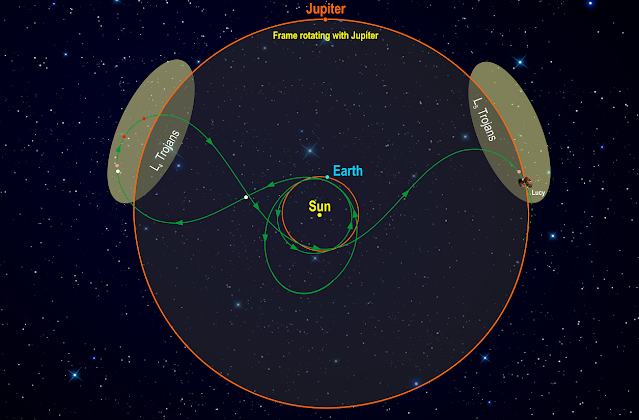 This is Lucy's trajectory over the next 12 years.  It looks complex but it's really more complex than this shows.  This perspective is created by fixing Jupiter's position, so during the 12 years of the mission that this is showing, Jupiter and both groups of Trojan asteroids will complete a little more than one full orbit around the sun, making this a more complex plot.  Plot from the Southwest Research Institute, the scientists behind the mission.

I'll end this with a mind-blower.

Somewhat ironically, although Lucy is visiting the "Jupiter trojans," it will never be closer to Jupiter than when it is on Earth. This is because the Trojans trail Jupiter at a greater distance than the distance that lies between Earth and the Solar System's largest planet.