As usual a few stories I think of being interesting enough to talk about, but that aren't big stories.

Starliner Put Off Into '22

It's hardly news, but the last time I ran a dedicated piece on Starliner, I dropped the opinion that it wasn't likely Starliner would fly its unmanned Orbital Flight Test-2 (OFT-2) mission to the ISS until January 3rd to February 22nd.  This Tuesday, NASA and Boeing announced that they were going into deeper failure analysis of some of the failed valves, with a most likely date being before the end of the 2nd quarter of next year.  One source interviewed for that article said the "No Earlier Than" date for OFT-2 is May.

NASA and Boeing officials said Tuesday that they have successfully removed two valves from the Starliner spacecraft and have shipped them to Marshall Space Flight Center in Alabama for further analysis.

The forensic examination—the two valves will be inspected with a variety of techniques, including a CT scan—is part of Boeing's ongoing effort to diagnose the "stuck" valve issue that caused an abort of Starliner's uncrewed test flight on August 3. With less than five hours remaining in the countdown to launch, during a routine procedure, 13 of the 24 valves that control the flow of dinitrogen tetroxide oxidizer through the service module of the spacecraft would not cycle between closed and open.

The funniest part of this to me is the failure was attributed to humidity.  Who would have guessed there would be humidity in Florida in August?  Listen, Boeing, humidity is one of Florida's main exports.  And they say this capsule is designed to be launched from Florida.

Boeing's chief engineer for space and launch, Michelle Parker, said during a news conference with reporters Tuesday that the company has a pretty solid hypothesis for what went wrong. At some point during the 46-day period when the vehicle was fueled—and when the valves were found to be stuck—humidity must have gotten into the spacecraft. This moisture combined with the oxidizer and created nitric acid, beginning the process of corrosion.

Early Wednesday, the Orion capsule was lifted by cranes inside the Vehicle Assembly Building at the Kennedy Space Center and placed on top of the SLS in preparation for the first Artemis unmanned flight.  Technicians inside the VAB worked overnight to tighten 360 bolts connecting Orion to the first Space Launch System heavy-lift rocket.

Cliff Lanham, NASA’s Artemis 1 flow director, said late Wednesday that the Orion spacecraft was “soft mated” to the rocket with an initial set of five bolts in each quadrant. The spacecraft sits on top of the Orion Stage Adapter, the uppermost element of the Space Launch System that sits atop the rocket’s cryogenic upper stage.

The rest of the process of “hard mating” the two was expected to last through today.  A launch date will be set after the completion of a wet dress rehearsal currently scheduled for December.  February '22 is likely to be the earliest the SLS could launch.

The test late Monday night Boca Chica time seemingly was a pre-burner test for the Raptor Vacuum engine.  Quite a bit earlier this evening, 7:16 PM CDT, they had a successful static fire of S20.  SpaceX's Twitter account says it was the static firing of the Raptor Vac, and the first such test ever.  A second static fire occurred at 8:18:25.  This one looked rather different from the first, and lasted over five seconds. 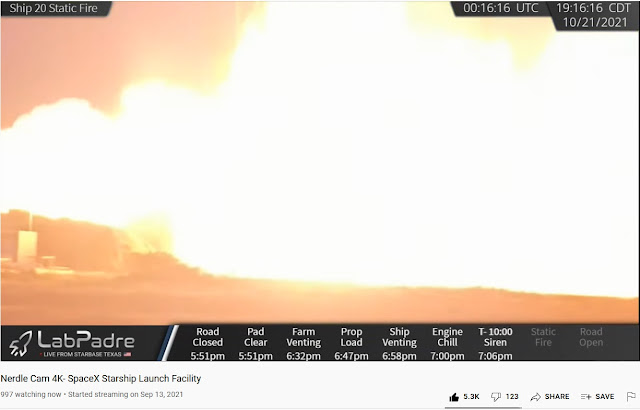 Not that you can see anything except overexposure.  There should be videos of this on YouTube by the morning.