It has been 5-1/2 weeks since I posted that Boeing had grounded their Starliner capsule while they continued to troubleshoot the valve failures they had before they aborted the re-test mission at the start of August.

On Tuesday, NASA's chief of human spaceflight operations, Kathy Lueders, said teams of engineers and technicians from Boeing and NASA are continuing to assess the issue with sticky valves. "I think the team's making great progress on further troubleshooting," she said.

The original information I had gotten about problem the week before said there were 13 valves and that seven of the 13 were operating normally by then.  In today's article in Ars Technica, that gets made a bit less clear.

Just hours before launch, Boeing had to scrub the much-anticipated uncrewed test flight of the Starliner spacecraft in early August after 13 valves that control the flow of dinitrogen tetroxide oxidizer through the service module of the spacecraft malfunctioned. There are 24 oxidizer valves in the propulsion system, which is critical both for in-space travel as well as launch emergency escapes. During investigations on the launch pad, technicians were able to open some but not all of the valves.

Since returning Starliner to Boeing's Commercial Crew and Cargo Processing Facility in Florida, engineers have been able to gather data about the "dry" side of the valves, but they may need to remove the valves from the spacecraft to assess the "wet" side, Lueders said. This would be a cumbersome process.

The 13 valves that are the issue are apparently all on the dinitrogen tetroxide oxidizer side.  That makes it sound like the problem is in 13 out of 24 valves.  There's no mention of seven of them being OK.

Boeing and NASA have agreed to decide "within the next few weeks" if they're going to try to take this service module apart to remove the valves and conduct deeper failure analysis.   If they decide to remove those valves, Boeing would likely swap to a service module intended for a future crewed flight and use it for the uncrewed Orbital Flight Test-2 mission.  I would hope that they've already checked that service module to see if its valves have the same problems.

A new date for this OFT-2 mission has yet to be set, and Lueders indicated one may not be set any time soon. She suggested the mission probably will slip to 2022. "My gut is that it would probably be more likely to be next year, but we're still working through that timeline," she said.

Scheduling this mission is trickier than just launching Starliner into Low Earth Orbit and testing the systems because part of the test is for it autonomously dock to the International Space Station. To do that, the ISS has to have a docking port available.  Ars correspondent Eric Berger has looked into the schedules and concludes the timing doesn't look good.  There are two time windows when the ISS has an open docking port remaining in this year: the entire month of October, and from November 12 to December 1.

October is next week, and it doesn't seem likely that Starliner could be made operational for early October.  The rest of the month doesn't look good either.  It turns out that Starliner's Atlas V has a conflict with another mission, a probe (called Lucy) to Jupiter's Trojan asteroids that will use the same launch pad.  Lucy's launch is No Earlier Than October 16 and turning the pad around is a two week operation.  It doesn't seem very likely its Atlas V booster can be made ready to go for either of those launch windows, although the second one might be more likely.

If they can't conduct their unmanned test flight by around the middle of November, the next available window at the ISS is January 3rd to February 22nd.  That seems like the safer bet.

For those who don't remember, SpaceX's Demo-1 mission, their version of this Starliner Orbital Test was conducted in March of '19.  That puts them roughly three years ahead of Boeing, who the Beltway Bandit crowd thought was the safe bet to provide these launch services. 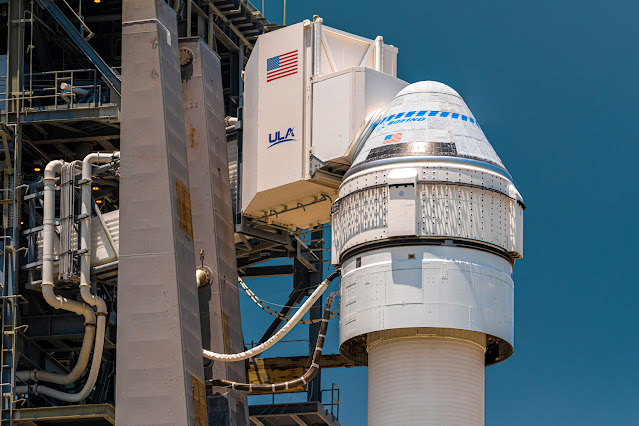 The Boeing Starliner capsule on its Atlas V; last July before the test that resulted in the scrub.  Trevor Mahlmann photo at Ars Technica.