Looks Like a Week to Keep an Eye on Boca Chica

SpaceX has scheduled road closures all week, with one closure in place as I type (it's just about 7PM CDT).  The county website says the only exception to "all week" is Tuesday, a secondary day to today's closure. 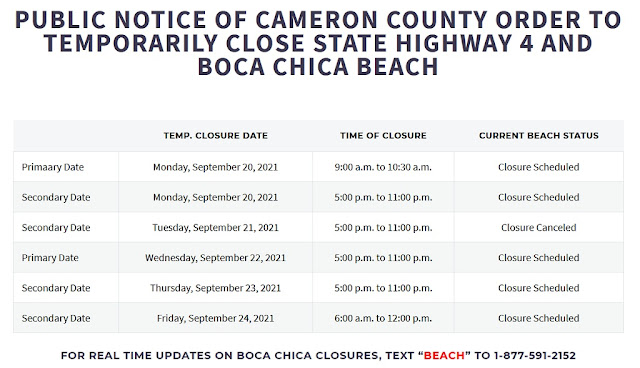 As you can see, most of the closures are for 5:00 to 11:00 PM, when traffic going the beach is lowest and extending the closure for a test that doesn't go as quickly as planned is less likely to interfere with someone going to the beach.

Teslarati is suggesting this could be a full week of testing.

First rolled to SpaceX’s Starbase orbital launch site more than six weeks ago and stacked together for the first time on August 6th, the company has spent the last month putting the finishing touches on Starship 20 (S20) and Super Heavy Booster 4 (B4) – ranging from heat shield installation to plumbing and wiring. Perhaps most importantly, SpaceX has also installed some or all of the Raptor engines that are expected to support the ship and boosters’ first static fire qualification tests.

As a quick reminder, Booster 4 (B4) and Starship 20 (S20) first went to the test area around the start of last month, went through a trial stacking, then were de-stacked and both went back to the Shipyard area.  Both had their Raptor engines pulled with some sent to McGregor (Texas) to be tested on their static test stand.  S20 went back to the test area, had its engines replaced (three Raptor Boost engines and three Raptor Vac engines for use in space).  B4 followed on September 7th and similarly had its engines replaced.   Raptor 67 (left) was replaced by #64 (right) at some point recently. 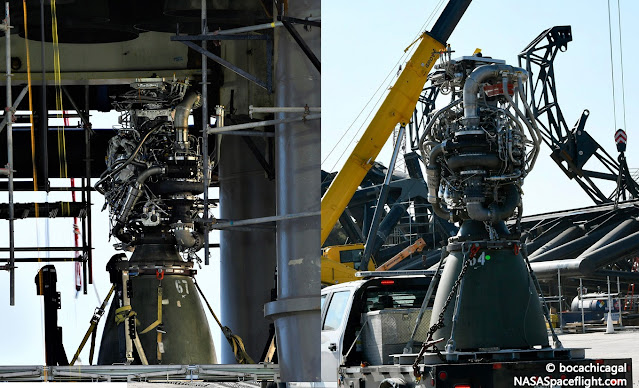 Photo credit shown on the photo, to @bocachicagal, via NASASpaceflight.com

Super Heavy boosters have only the Raptor Boost engines, like #67 and 64 above, which have been static tested many times.  We have never seen a vehicle static tested with the Raptor Vac engines so that will be big milestone for them, but much of what lies ahead are major milestones.  There was one static fire of three engines on B4.  I expect them to recreate the cryogenic tests to S20, perhaps just plunging ahead to the static firing on the first try.  I think that once S20 is tested with all six engines, it's ready for flight.

B4 will need to be tested with all 29 of her Raptors and that will be epic to watch.  If those engines are set to maximum thrust, Super Heavy will likely become the most powerful rocket ever tested and – like with S20 – will be more or less qualified for its first flight if the test goes according to plan.