A couple of months ago, as Starship and Super Heavy began to come together, the company let on that there had been some changes in their approach to the design.  The essence of the decision is that in the quantities they're going to build these in, considering their goal to transport people and cargo to Mars in sufficient quantity to bootstrap a civilization there, it's always better to move infrastructure to the ground support and off the ships.

Every Starship prototype we've seen fly has been fueled through its base, and you probably have seen concept drawings of Starships refueling on orbit, attached butt to butt (base to base if you prefer).  Within the last few months, the drawings showed the two Starships switched to belly to belly orientation, and the fueling port moved to the lower side of Starship.

Later on, in an interview and tweets, it became clear that the move away from longstanding ship-to-booster umbilical plans was part of CEO Elon Musk’s latest crusade: moving parts and complexity from Starship and Super Heavy to the launch pad at any cost. As a result, rather than adding a little extra weight to Super Heavy and likely reducing total payload to orbit by a percent or two for an extremely simple, protecting umbilical solution, SpaceX would instead have to implement a massive swinging arm that would reach out from Starship’s launch tower to connect it to pad systems.

The start of adding the capability of fueling the Starships was the addition of the base of the quick disconnect (QD) arm that was added at the end of August.  The next part of the build out of the QD arm was added to the Orbital Launch Integration Tower (OLIT) this week with the road closures we talked about. 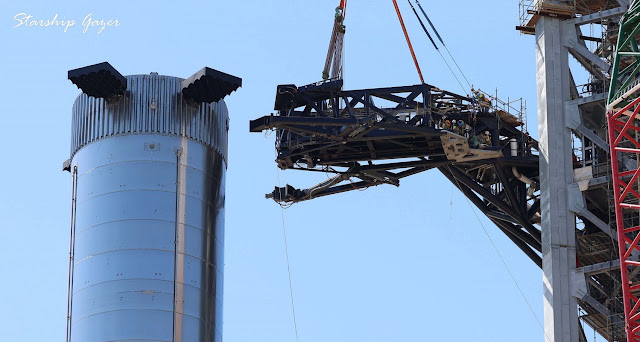 Photo credit to Starship Gazer on Twitter.  More pictures at that link.

This is being said to not be complete; there's no obvious panel to mate with a Quick Disconnect panel on the Starships.  The claw-like appendages that extend farthest forward and look to be on the lowest part of the QD arm are said to be like the Strongback SpaceX uses on Falcon 9 launches that help hold the booster and which is retracted in the last minutes of the countdown (T - 4:30 in the video I watched).

Of course, the quick disconnect arm is just one of – and the most minor of – three massive ‘Mechazilla’ arms destined for the launch tower. Just a few hundred feet to the west, SpaceX is hard at work fabricating and assembling two far larger tower ‘catch’ arms and the cradle-like frame they’ll eventually attach to. While they will also give SpaceX far more flexibility to stack and manipulate Super Heavy and Starship in high winds and less than optimal weather conditions, the ultimate purpose of those arms is to catch Super Heavy boosters (and, maybe one day, Starships). According to a new contributor to NASASpaceflight forums, those Mechazilla catch arms could be installed as early as “this weekend or next week.”