I mentioned on Sunday's post that I had received the tooling to machine the crankshaft.  After I finished putting up that post it seemed like as good a time as any to put the faceplate on the lathe and set up to work again.

Let me note first that the people who make these accessories never include instruction sheets.  I think their view is that if you're using a lathe you should be professionally trained and you should know how to maintain or upgrade it.  I also wouldn't be surprised if not including instructions might have some aspect of trying to protect themselves from spurious lawsuits.

Now, I'm fully self-trained and take responsibility for myself, and there really didn't seem like many ways to put it on incorrectly.  It has three bolt holes on the back which match with three through holes on the mounting plate that's standard on the lathe.  I put the first bolt in, went to rotate the two plates to put in the next bolt and quickly found it wouldn't turn.  There was interference between a different bolt on the lathe and the faceplate. 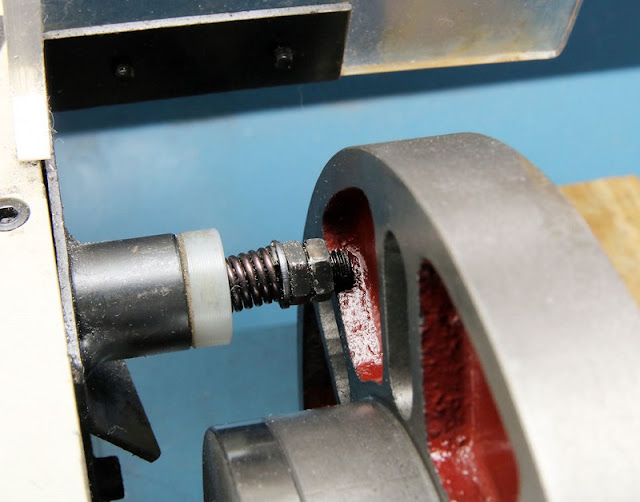 That bolt (a metric M8?) has two nuts on it, putting that spring under tension.  It sticks maybe 1/8" inch into that cavity in the casting.  The bent, black sheet metal you see on the left and top edges is holding a clear plastic "lathe chuck guard" that is supposed to keep your fingers away from the chuck but really only seems to catch oil the chuck may sling.  A closer look showed that when the guard is down, the faceplate will rub on the plastic and I'm sure eventually (a few minutes) will wear through it.  A note on the faceplate's product page says, “This faceplate will not fit with the plastic chuck guard in place.”

I'm going to gloss over me looking at the lathe and trying to figure out how to remove that for several hours when the answer is visible right there in that picture.

All I had to do was unscrew the two nuts on the right end of the interfering bolt and then the cover just slides off the bolt, followed by unscrewing that bolt into the left side of the lathe.  That's when I set things up to hurt myself.

This is the faceplate, lathe dog, crankcase blank and all. 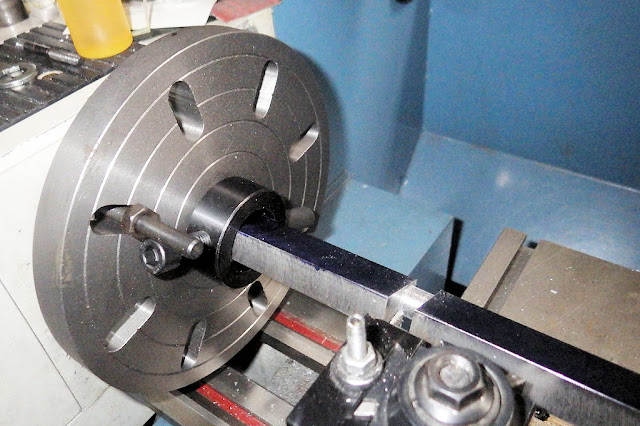 Overall view.  Look closely on the left slide of the cut away area midway down the bar.  You can see I used a parting (cutoff) tool.  It's a 1/16" (.062) thick blade and because I know that's going to bend sideways under slight side forces, I minimized the amount that tool sticks out of its holder.  Trying to stiffen it.

I'm not completely sure how it happened, but I think I put my right hand on top of the tool holder (that large hex nut along the bottom of the picture) and let my finger stick out forward a little too far.  The bar was spinning and it whacked my finger.  It took out almost all of the fingernail and nail bed, and we figured it was time to go to an urgent care place.  The doctor there said the end segment of bone in that finger was broken and they don't treat "open fractures."  They told me to go to an ER.  Where I sat for 3-1/2 hours, never talked to or saw a doctor, never really had anyone look at it closely, then had a nurse leave a blood soaked and hardened gauze pad on it, wrap some self-adhesive gauze around the finger, and refer me to a hand surgeon.  We got home around 10PM last night.

I'll see the hand surgeon in the morning.