Trending Back Toward Normal

Or at least as normal as I get.

A followup to my missed time last week due to my finger injury.  On Friday, I had an appointment with the hand surgeon, and while she didn't take out the stitches (I have another appointment next Friday), she said it was healing well and cleared me to start resuming more normal life. No more instructions to keep it dry, showering without my finger in a plastic bag is fine, just don't immerse it in water and leave it there. The pain is much better, and I think the last time I took even a Tylenol was last Wednesday night.  Yeah, it hurts if I bump it on something, but that's a little less true every day or even every hour.

Last night, I picked up a guitar for the first time since the injury.  All I really need my right index finger for is holding the pick and I found the pick drifted to my middle finger and thumb with no conscious thought at all.  I almost wondered if I usually played that way.  This morning, I took my first bike ride.  Until Friday, my orders were to keep it dry and when I asked her about riding, she said something like, "how about just walking for a week?"  Sure, I can do that.

Friday after the appointment, I spent a little time getting the lathe set up to resume working.  I set up three tools and, yes, I ran the lathe a little.  In a discussion on a machinist's forum about making a crankshaft like this, a guy posted pictures of his lathe with a crankshaft in the process of being made and an interesting looking tool he created to do most of the difficult stock removal.  Since I don't have permission to post his photo, let me show you a similar tool I was using on my lathe. 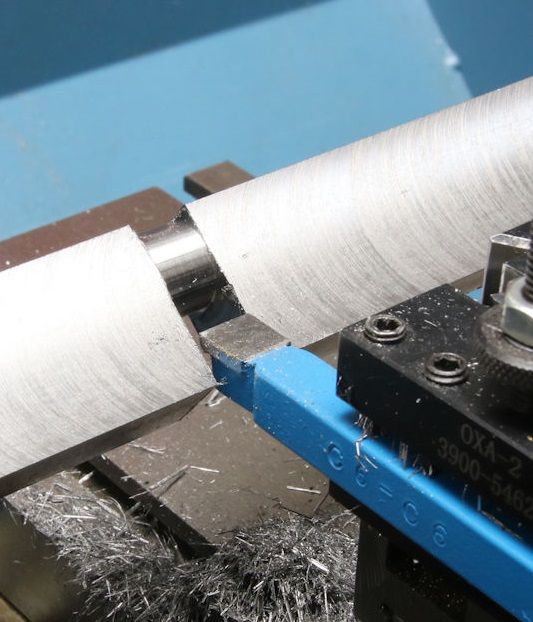 This is a square nose cutter like the one he started with, but there are a few differences between mine and his.  First, mine is 3/8" wide and his is 1/4" wide.  The gap that the cutter goes into is going to be 0.438, and the advantage of the smaller cutter is that it can be swept side to side easier than the bigger one.  Something he did that he said made a difference was to put a gap in the middle of the square cutting edge.  His theory is that it reduces any tendency to cut differently across the front of the tool.

I've taken to calling this a Terry Thomas cutter, but maybe that only works for those of us old enough to remember the British Comedian from various movies and TV shows in the 1960s.

He ground his tool out of steel, while this one is carbide, and relieved the sides a little to be doubly sure the sides of the tool don't cut the sides of that gap.  I considered trying to grind a tool, but there's the matter of having somewhat less than 10 fully functioning fingers and if I'm going to do something that requires intricate dexterity, that might not be the best choice in the world - at least not now.  My knowledge of grinding cutting tools is very limited.  I know that it's something people do and I've taken a few baby steps at trying to learn how to do that, but I really don't feel like it's something I can easily do.

What I thought I'd do is try to find a 1/4" carbide cutter like the 3/8 one I have and use the diamond files I have to give it the Terry Thomas gap in the middle.