Some Relief for the Automotive Chip Shortage?

Yes, help is coming, but don't hold your breath.

By now, most people have heard of the chip shortages affecting US car and truck production, as well as everything else.  There are reports that some models of cars and pickups are completely out of production while others are in limited production.  This week brings some good news from Electronic Design.  US microprocessor giant Intel has said it's going to allocate some production capability at various facilities to the automotive sectors.

Intel CEO Pat Gelsinger said he plans to commit some production at one of its largest non-US fabs for the automotive sector as it moves into a growing market that the global chip shortage has ravaged for months.

The Santa Clara, California-based company is reserving an unspecified amount of output at its Ireland fab to roll out chips for auto makers that urgently need them, the CEO said on Monday at the IAA auto conference. Intel would not say when it plans to start churning out automotive-grade chips from the plant–its largest 300-mm fab outside the US. The factory specializes in chips based on its previous generation 14-nm process.

Those two numbers mean very different things: 300 mm is the diameter of the silicon crystal that is sliced into wafers for chip production while 14 nm is the size of the smallest features on the chips.  That's a small geometry size and very advanced process.  The problem is that most of the automotive chips are using relatively much older processes and larger sized processes than 14 nm.  (a 300 mm wafer is 11.8 inches in diameter; 14 nm is 14 billionths of a meter or 551 billionths of an inch).  We've gone into a lot of this before, most recently about a month ago.  While processes like the Intel 14 nm fab are the glamor side of the industry, the vast majority of parts fabricated use larger geometries.  14nm and smaller geometries produce less than 15% of world semiconductor output.

IEEE Spectrum, the closest thing to a general readership publication the Institute for Electrical and Electronics Engineers puts out, runs an article on the chip shortage saying the auto industry is primarily using much larger geometries, like 40nm and larger.

Chips for the automotive sector are made using processes intended to meet safety criteria that are different from those meant for other industries. But they are still fabricated on the same production lines as the analog ICs, power management chips, display drivers, microcontrollers, and sensors that go in everything else. “The common denominator is the process technology is 40 nanometers and older," says Mario Morales, vice president, enabling technologies and semiconductors at IDC.

40 nm geometries are mature, 15 year old technologies, and larger geometries even older.  The bind here is that when the fabrication facilities for the bigger geometries were being built, they were designed around 200 mm wafers.  Those fabs produce smaller numbers of parts on a wafer and those wafers, like the larger geometry parts are still available, but in smaller quantities. 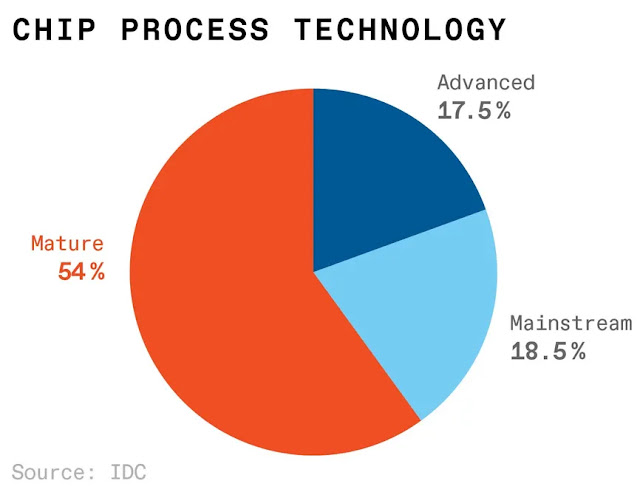 Cars rely on chips made using mature—40-nanometer and older—manufacturing processes. Those processes make up most of the existing manufacturing capacity.  From IEEE (IDC was the creator)

It sounds like the industry needs more investment in the older technology fabs, because those 40 nm fabs still produce useful parts and the market for them is expanding.  IEEE reports that by 2022, 10 new fabs for larger geometry parts will be online, and the industry is dumping money into the problem.

Bear in mind that these are large, specialized, factories and once the factory is built, the parts don't just start being available immediately.   The time for a wafer to be made into parts ready to ship varies but can go from a couple to several months.  (BTW, John Wilder at Wilder Wealthy and Wise has done a couple of interesting posts on the drawbacks to the wonderful benefits that such specialization brings us.  Worth your time to read.  Part 1 and Part 2.)

While Intel's commitment to producing automotive-market chips on its Irish 40 nm fab is good and will more easily address processor shortages for cars than the bigger analog parts, the answer is to not forget that those larger geometry parts still have very large demands and some investment in augmenting those plants or keeping them going is worthwhile.  Intel has predicted chips will account for 20% of the bill of materials (BOM) cost of a premium vehicle by 2030, up from 4% in 2019.  That phenomenal growth is expected to continue.  While the industry watchers predict the worst of the shortage situations will begin to be resolved in the third or fourth quarter of 2021, it could take much of 2022 for the resulting chips to work their way through the supply chain to products.