Some Final Words on Inspiration4

Probably final words, but that could change.

I was surprised to see that live coverage of the splashdown and completion of the mission was on Fox News last night.  All that I saw (not much) was a direct rebroadcast of the feed that SpaceX had on YouTube.  As is generally the case, SpaceX made it look routine.  One of my pet sayings is, "almost as if they knew what they were doing" and that was the case.  The view that public interest was high enough that Fox should broadcast it live was a good sign, and the local newspaper reported that there was a good influx of tourists into the area to watch Wednesday's launch. 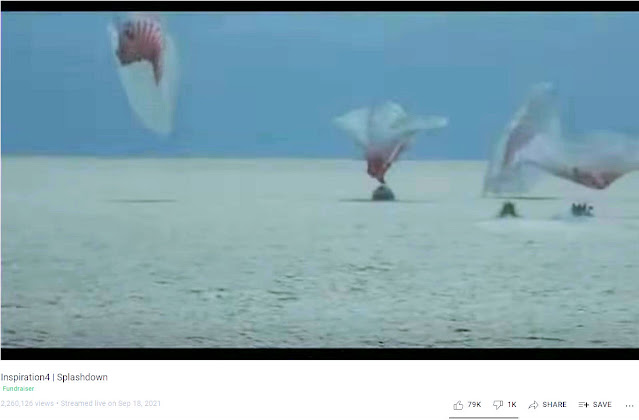 Screen capture of the Crew Dragon capsule just after splashdown as the the four parachutes fall slowly out of the sky, from the SpaceX video.

Rick Moran of PJ Media summed it up like this:

History will note that on September 19, in the year of our Lord 2021 (not sorry for offending atheist readers), 4 human beings returned home after a nearly routine journey to space. What made the journey more than routine was that none of the four humans were professional astronauts. The flight was privately funded and launched by the public/private space venture, SpaceX.

Jared Isaacman, a 38-year-old billionaire entrepreneur who paid for and organized the flight, is a noted pilot but not trained in the workings of the Dragon 9 space capsule. Others on the jaunt included the mission pilot, Sian Proctor, 51, a college professor from Arizona; a 42-year-old father of two from Arizona Chris Sembroski; and a physician’s assistant Hayley Arceneaux who works at St. Jude Children’s Hospital. Ms. Arceneaux is a childhood bone cancer survivor who was treated and cured at St. Judes.

St. Jude’s is the real beneficiary of the flight as Isaacman raised funds to raise awareness and research funds for the facility. To date, the flight has raised more than the $200 million goal with Isaacman pledging $100 million originally and Elon Musk “throwing in’ another $50 million after the successful conclusion of the flight.

They report that Chris Sembrowski entered a lottery for one of the seats.  He didn’t win, but a friend did and gave him the seat. The lottery raised $13 million.  The running tally of the fund raiser that YouTube has been displaying on this video's page shows the total raised from that page to be $606,890.

In a Twitter thread that I never screen captured, Eric Berger at Ars Technica says that his rumor sources are saying SpaceX is fielding lots of calls about doing more missions like this for hire.  I think it was a historic mission, but I still see these as being too expensive for all but a tiny fraction of people who would love to go to orbit.  They're expensive in time and money, which are ultimately related for most people; they did spend time away from their "normal lives" training for the mission.

The key to opening space is to get the cost of getting to orbit down.  The Space Shuttles were supposed to solve that problem, getting the cost down $25/lb.  They ended up missing that goal by a factor of 1000; that's right, $25,000/pound.  With Starship, SpaceX is talking about costs to orbit closer to that $25 mark.  SpaceX bid on a NASA mission called TROPICS last March bidding 220,000 pounds to orbit for $8 million.  That's $36.36 per pound, which is cheaper than the over-the-counter rates for one pound from here to Japan at FedEx's website.  The $25/lb NASA was talking about in the late '70s adjusted for inflation is around $100/lb. today.

The best hope for opening access to space that doesn't require a millionaire's budget lies with Starship.  I'd add "or something like it," but nobody appears to have anything like it in development.