The so-called Fight for $15 (new federal minimum wage) has been going on for many years; I've been posting about it since at least this time in 2013 - eight years ago.  The talk about $26/hr for minimum wage is quite a bit newer, I first heard about it from Divemedic at Area Ocho at the end of last month, but perhaps that was just from avoiding the political screaming a bit too much.  Don't follow the link from his post; at best it's a waste of time; at worst it might cause a cerebral hemorrhage.  I don't want to be responsible if your head explodes.

One of the things to bear in mind about these arguments is that even economist Paul Krugman, the guy who is almost the laboratory standard for being wrong about everything, recognizes that minimum wage laws are ultimately self-defeating.  They always hurt most the people they claim to want to be helping.

Imagine my surprise when I found they had a quote from legendary liberal economist Paul Krugman and he was right!  More at the story itself, "5 Reasons Raising the Minimum Wage is Bad Policy".

As Paul Krugman explained, "So what are the effects of increasing minimum wages? Any Econ 101 student can tell you the answer: The higher wage reduces the quantity of labor demanded, and hence leads to unemployment."

At first, I wasn't sure if I could handle the brutal unfamiliarity of being in a universe where Krugman is occasionally right.  For years I've reflexively known that if he suggested we do something the safest bet is to do the opposite.

In this case Krugman is simply demonstrating the truth of the saying, "even a blind pig finds a few acorns."  In that article from back in '13, I came up with an analogy for creating money out of thin air, like defining a min wage, that I liked enough to re-use and embellish over the years.

Let's pretend it would be legal to do everything I'm about to propose.  We just have to follow the consequences to logical conclusions.  Since we're talking about almost doubling minimum wage, here's the experiment.  Take every bill out of your wallet, pocket or money clip and double the denomination.  I mean, if you have $1 bills, mark them $2.  Take $5 bills and mark them $10, $10 bills and mark them $20, $20 and mark them $40 (yeah, I know there's no such thing, just work with me here).   I'm going to assume if you're worried about minimum wage, you don't have any $50 or $100 bills, but do the same with them if you have them.  Congratulations, you now have twice the money you had a few minutes ago.

The kicker is that everyone else in America gets to do the same thing.  Are you further ahead in life because we've doubled the numbers on the money you have?  Or is the guy that you worry about all the time, the guy who used to make twice what you make still making twice what you make?  What if the price of everything doubled, too?  Wouldn't you be exactly where you started from?

The most insidious aspect of that analogy it is that it's still more kind than the actual effects of a min wage law.  In reality, the prices of everything go up and the people who are working for min wage are asked to do more, or work fewer hours (or both) to help the company stay competitive.

The problem is that the majority of people have what's called the "money illusion;" they confuse the amount of money they have with wealth.  It's an easy mistake to make, but money isn't wealth, it's a measure of wealth.  The easiest visualization to make the point is perhaps the pictures of  people from Wiemar Germany during their hyperinflation in the 1920s, carrying wheelbarrows full of paper money. That money could buy almost nothing then, but the year before that picture a single bill off that cart could have bought lunch.  Money as a measure of wealth was collapsing so having any amount of money couldn't guarantee that the holder could buy anything they needed to stay alive. 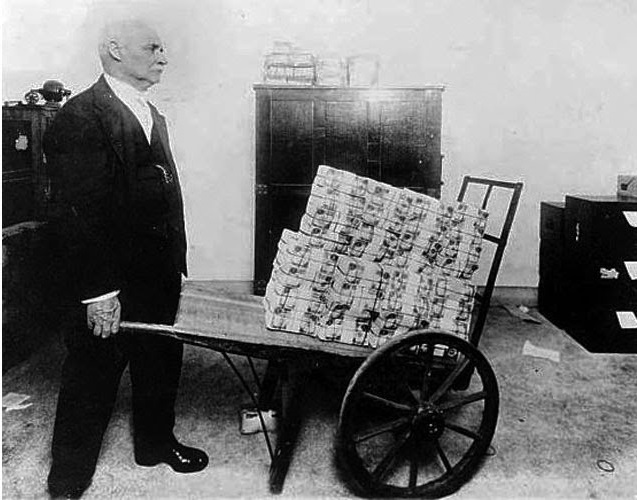 In the end, all that will be accomplished by arbitrarily increasing everyone's pay in relation to a new minimum wage, whether $15 or $26/hr, is inflation.  Workers make more nominal dollars (that is, they make a bigger number of dollars) but they haven't increased their wealth in any way.  They haven't advanced with respect to any other workers.  They haven't made themselves more valuable in any way, so their relative value compared to other workers still leaves them on the bottom of incomes.  It's still minimum wage, after all.  All they've done is crank another inflation source into the economy and that hurts them more than anyone else.