You Keep Using That Word...

In this case, it's the Evil Party line that their so-called $3.5 trillion spending plan (people who have analyzed it say it's more like $5 trillion) will really cost zero dollars. 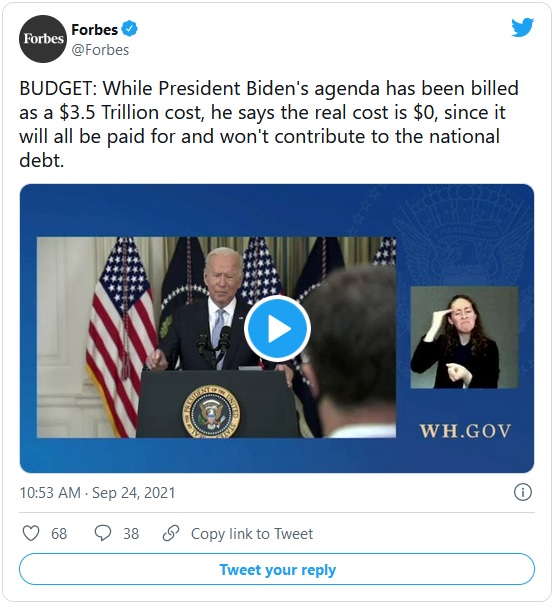 As if to underline for emphasis, the president tweeted the claim that “My Build Back Better Agenda costs zero dollars”  by saying,

Instead of wasting money on tax breaks, loopholes, and tax evasion for big corporations and the wealthy, we can make a once-in-a-generation investment in working America.

And it adds zero dollars to the national debt.

Sorry, pudding-for-brains, but the term for paying for programs by taxing everyone is "revenue neutral" not "costs zero dollars."  Have you been listening to those Modern Monetary Theory idiots again?

Of course, when they start a propaganda campaign, they push the same message everywhere possible, and within a little while Congress Critter Pramila Jayapal said that “This is a zero-dollar bill because it's all going to be paid for with taxes on the wealthiest corporations and the wealthiest individuals.”  Brad Polumbo from FEE responded this way. 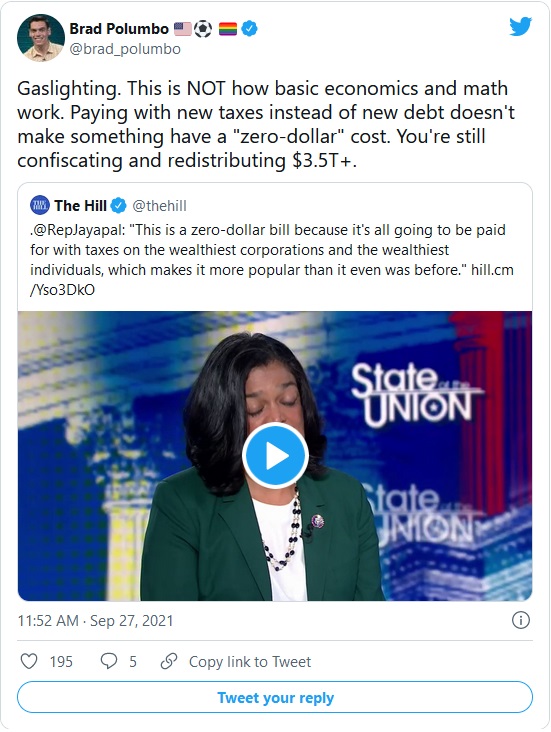 I would just add that what they're saying about only the most wealthy people paying for these programs is proven to be impossible.  When they tax corporations, those taxes will paid by two groups of people: (1) the people who buy their products and (2) the employees.  This has been studied literally more times than I can count.  Corporations don't have any revenues except for what they sell.  They can cover the expected tax expense by either adding that expense to the cost of their products or by cutting expenses in the company.  This has been shown to usually result in lower pay and benefits for employees.  In other words, corporations don't pay tax, they collect tax and send it in.

As for taxing the wealthiest, I've written volumes on this but it comes down to a couple of things.  Most importantly, this bill is going to cost $3.5 trillion and if they confiscated, not taxed, the entire net worth of the 20 richest billionaires in America, they'd get $ 1.077 trillion.  There's not enough billionaires below that number to add up to what they need.

Like I say, over the years I've written not just inches of text on this subject, but yards of text.  One of my favorite ideas to show how absurd the socialists are was to point out that they view the rich as Scrooge McDuck swimming in his pool of gold coins.  It's a cartoon, OK?  There are no pools of gold coins.  The vast majority of the wealth of these people is in properties they own, like Jeff Bezos' Amazon stock or Mark Zuckerberg's Facebook stock, and I'm sure their advisors have diversified them, like Bill Gates advisors have by buying up land.  All of these are things that would collapse in value if they flooded the market with it to sell in order to pay a new tax bill.

Years ago, David Stockman, who of course was Reagan's budget chief, said,

The only conclusion that stands up to reason is that if they really want to pass something this big that's revenue neutral, the taxes have to extend all the way down the income ladder.  Yes, they'll get more tax money from the wealthy, just like they do now.  I haven't seen any accurate numbers on this for a while, but a few years ago, I pointed out things like the lowest 50% of incomes pay 3% of all tax revenue, and the top 3% of U.S. taxpayers paid practically 90% of all taxes.  The top 1 percent paid a greater share of individual income taxes (37.3 percent) than the bottom 90 percent combined (30.5 percent).  The numbers of taxpayers paying most of the income tax become shockingly small. The top 0.1% of income tax payers, who paid more than the bottom 70% of the population combined, is just 1409 taxpayers.  Those 1409 people paid more than 98.7 million other taxpayers.

If you know people who think that taxing corporations is a good idea, remind them they'll be paying those taxes themselves.  At the (probably) bogus $3.5 trillion cost, that works out to $24,000 per taxpayer.  If it's really the $5 trillion analyzed that bumps it up to $38,000 per taxpayer.  Like all tax and spend programs, it's going to hurt everyone, and some will be hurt more than others. 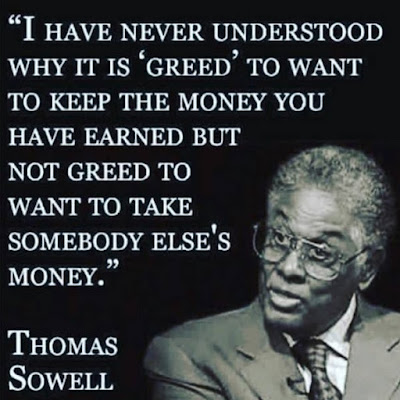