For the large majority of these analyses, the FAA document finds "no significant impacts." The impact of noise to surrounding communities, including South Padre Island located several miles away, was believed to be one of the biggest concerns. But an independent assessment found noise levels to be manageable.

There's an almost obligatory reference to possible impact to "species listed under and critical habitat designated under the federal Endangered Species Act," but there may be ways to mitigate the risk.  The FAA also mentioned excessive road closures of Highway 4, which is something SpaceX has tried to involve the state or local governments handling by either building tunnels or roads.

Berger seemed a little surprised at the report, headlining the story by saying, "... it's not terrible" and it does come across well.  A point worth noting is that the comment period is 30 days.  Those of you who followed the BATF's comment period on the definitions of a receiver or AR pistols will recall those had 90 day comment periods.  I'm not sure if that was because of a distinction between those being Notice of Proposed Rule Making (NPRM) reports vs. this being an environmental review.   The process isn't over at 30 days, but waiting 30 is better than waiting 90.

Following the release of this draft assessment, the FAA will hold virtual public hearings on October 6 and 7 before the public comment period ends on October 18, 2021. SpaceX founder Elon Musk asked for support on Twitter shortly after the FAA released the draft document. "Please add your voice to the public comments," Musk said. "Support is greatly appreciated! Humanity’s future on the moon, Mars & beyond depends upon it."

After the public comment period closes, the FAA will finalize its environmental assessment. Following this, the FAA will issue one of three rulings: a Finding of No Significant Impact (FONSI), a Mitigated FONSI, or a Notice of Intent to prepare an Environmental Impact Statement. A "FONSI" would allow the formal launch licensing process to proceed. If a full Environmental Impact Statement is needed, launches from South Texas would likely be delayed by months, if not years, as more paperwork is completed.

Berger thinks this is a pretty decent sign for SpaceX, implying they'll be able to do some number of launches from Boca Chica.  Launching from a facility that's a couple of klicks (km) from the factory that built the vehicle is probably better for them than building vehicles and shipping them to the Kennedy Space Center by something like the giant barges other rockets have used (pictured here).

A possibility that has been talked about but that seems iffy is launching and recovering from drone ships in international waters.  SpaceX has bought some offshore oil rigs that were said to be for this purpose. 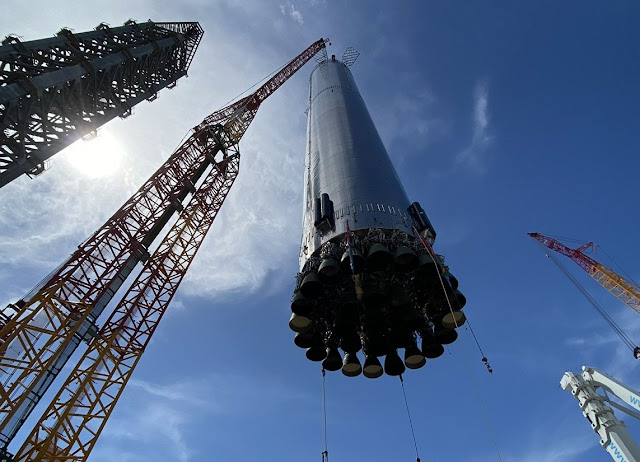 Booster 4 being put on the Orbital Launch Pad in August.  SpaceX photo.