Just A Couple of Images From Boca Chica

I was going to have more to say, but our evening was interrupted by our water leak alarm under the kitchen sink.  It appears to have been a "replace the battery" alert;  some checks for water came up negative but it took up time.

Meanwhile, the first ever Raptor Vacuum engine was installed in S20 this morning.  This is before it was lifted into place, and may have nothing at all connected. 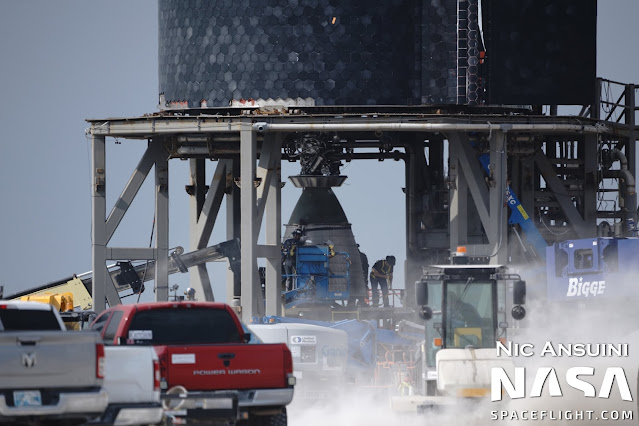 Later in the day, the second "Chopstick" of the pair being installed on the Orbital Launch Integration Tower (OLIT) was lifted into place.  It's the one on the left in this picture. 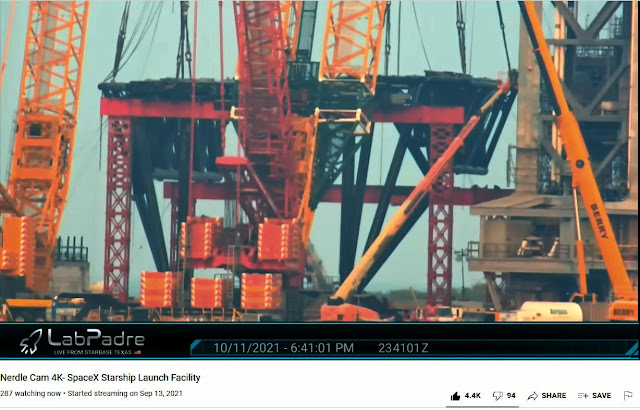 The red structure visible around the big crane (Kong) is an assembly fixture; the smaller red structure is farther from the camera than the taller one.  Although it only shows one of the chopsticks, this 14 second animated video shows what that assembly fixture looks like.   The two giant arms in the back (unrecognizable in this view) with wrap around ends, wrap around the OLIT and the straighter chopsticks open and close.

Cameron County's road closure website says a "primary" closure for tomorrow, 5PM to Midnight has been cancelled, but the back up dates of Wednesday the 13th and Thursday the 14th, same times, are still open.  If the road closures are to static fire S20, it will mark the first time the Raptor Vacuum engine has been fired in a Starship.  If S20 is fully configured for flight with six engines, three sea level and three vacuum, that will be a first.  I don't know of scenarios in which all six will be used simultaneously, but all six need to be tested.

A road closure shouldn't be necessary to put the Mechazilla Chopsticks in place so that could happen as soon as it's ready to lift.