The New Competitors in the Private Space Station Sector

Over the course of this blog, I've run a few pieces on a small company with big dreams.  The company is Axiom Space and their dream is a privately funded and operated space station.  The plans to get to that goal include sending private crews to the ISS as part of training, with the launch services provided and vehicles under contract from SpaceX.   That mission, Axiom 1 or AX-1, is currently "penciled in" on the Spaceflight Now Launch Schedule for February 21, 2022.  That's less than four months from now.

Axiom's vision of their own space station.  Older articles talk about them launching a lab that can be docked to the ISS and provide facilities for the private astronauts they want to put up there.  The current website implies that "Axiom Hub One" (crew quarters, + research and manufacturing capability) appears to be what they want to launch first to get their own station started.

This week, the competitive field grew with an announcement from Blue Origin about an effort in cooperation with a group of other companies and academic experts to put up a private space station for business and travel, research and tourism, with a goal of starting operation in the second half of this decade.

Blue Origin and Sierra Space today announced plans for Orbital Reef, a commercially developed, owned, and operated space station to be built in low Earth orbit. The station will open the next chapter of human space exploration and development by facilitating the growth of a vibrant ecosystem and business model for the future. Orbital Reef is backed by space industry leaders and teammates including Boeing, Redwire Space, Genesis Engineering Solutions, and Arizona State University.

Designed to open multiple new markets in space, Orbital Reef will provide anyone with the opportunity to establish their own address on orbit. This unique destination will offer research, industrial, international, and commercial customers the cost competitive end-to-end services they need including space transportation and logistics, space habitation, equipment accommodation, and operations including onboard crew. The station will start operating in the second half of this decade.

Sierra Space is an offshoot of Sierra Nevada Corporation, one of the companies vying for the Human Landing System contract, but not then partnered with Blue Origin.  Redwire Space is a bit tough to summarize.  Officially, they're a young company; according to that source, they were formed in June of '20, and they just went public with a stock Initial Public Offering in September, but their website shows they've already worked on the recently-launched probe to the Jovian Lagrange points, Lucy, and a wide variety of other important satellites that required that work as much as nearly 30 years ago.  Genesis Engineering Solutions appears to be a solid player in the satellite contract engineering area.  Boeing is ... unfortunately, at this point in time ... Boeing, the company that can't get a much simpler space capsule than this space station running properly. 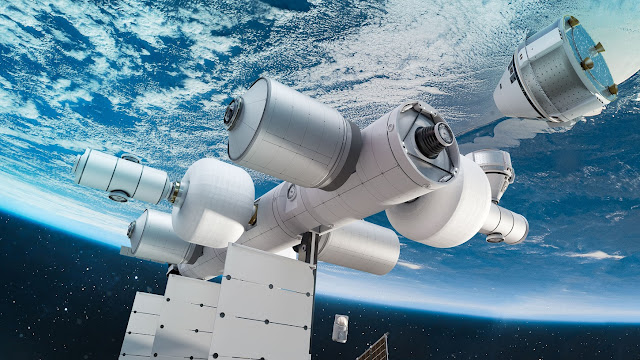 Blue and Boeing together saying they're going to do something like this isn't much more of an indicator of future success than any dozen of us blog readers getting together and saying that we'll put up a space station.  Except for their billions of dollars of funding, fresh from between the sofa cushions in Jeff Bezos' house.

Is that harsh?  Sorry.  Space is a harsh place.  Boeing used to know how to do this stuff.  The justification used to be, "yeah, Boeing will charge more than some others, but their stuff will work."  I think it's possible to get that back, but they need to really step up their game.