Mrs. Graybeard and I went to see the new version of Dune today at the local 10-plex.  As is usually the case, it was a Monday matinee and there were six of us in the theater.  The movie essentially set the hook in me within the first few minutes.  Visually stunning, excellent CGI and sets; it's getting so hard to know where one stops and the other starts these days.  I don't throw around the word masterpiece everyday, and I hesitate to use it here, but the book's story arc is epic and the screen does it justice.

Let me stop for a minute to talk about the books.  I read the first three-book series around 1979 to '80, so an early to mid-20s guy learning about working for a living.  A friend recommended them as an allegory for the middle east, with oil being replaced by the spice melange, "the most valuable substance in the galaxy," and the Fremen on Dune replacing the problems with militant Islamists starting to show up for the first time.  I read the second three books a bit later and I'm hazier on the dates.  I think it was around 1990 or the early '90s. To better understand the second three, I reread the first three as well.  To some degree.  I simply don't remember enough of the details.

I also saw the 1984 version of the movie, with Kyle MacLachlan as Paul Atreides, Sean Young as Chani the Fremen girl, Patrick Stewart and Sting.  I thought it did a reasonably good portrayal of the book story arc, but it's such a big arc.

Because of how long it has been since I've read the books, I can't tell you much about how faithfully this new version follows the story arc; all I can tell you is I recognized virtually every scene in the movie from the book and knew what the scene was about.  All of the characters that are mentioned I can recall from the books, even those that have minor roles in the books.

This version is the mental offspring of director Denis Villeneuve, and while he has a long list of work there on IMDB, the only one I'm sure I've seen was Blade Runner 2049, from back in '17, and I find I wrote about that possibly being the most visually stunning movie I'd ever seen.  The movie includes many familiar faces from other movies I've seen and it was fun to see them play different roles.  Chani is played by actress Zendaya, who I've seen in the Marvel Universe in the most recent Spiderman movies; The Beast Rabban Harkonnan is played by Dave Bautista of the Guardians of the Galaxy movies; Duncan Idaho (one of my favorite characters in the books) is played by Jason Mamoa of the Aquaman movies; Duke Leto Atreides is played by Oscar Issac from the last three Star Wars movies; and finally Baron Vladimir Harkonnen is played by Stellan Skarsgård from the first three Thor movies.  I shouldn't say "finally" - there are more.

The title screen said, "part one" and IMDB is telling me that part two is in "pre-production."  Unless they did lots more shooting while they had everyone on location, I read that to think the theatrical release would have to be more than a year out. 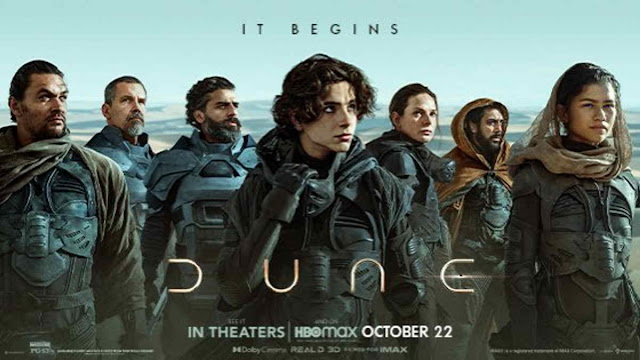 It's a two and half hour movie, and that's setup for at least one more movie, possibly two.