On The Big Story of the Day

Accredited as one of the best singer/songwriters of his generation, Simon might be best known as half of the iconic duo of Simon & Garfunkel formed in 1965, although his solo career was longer and arguably more productive.  His popular songs are too numerous to list.  The guy has 12 Grammy Awards, a Grammy Lifetime Achievement Award, a Songwriters Hall of Fame induction, a Johnny Mercer Award, and not one but two Rock ‘n’ Roll Hall of fame inductions, one for Simon and Garfunkel and one as a solo artist.

Just kidding.  Well, I mean it really is his birthday and all of that is true, but to most of the news of the world the big story of the day is William Shatner's trip to space on Blue Origin's New Shepard rocket. 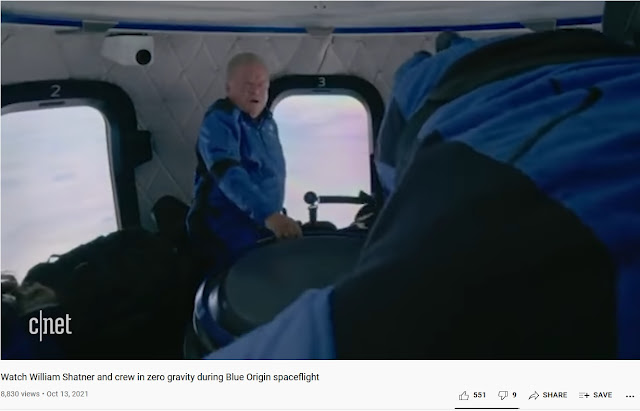 There's a 39 second video from their time in weightlessness in a couple of places.  This screen capture is from the C/Net Highlights channel at about the 23 second mark, where you can see Shatner visibly saying "oh, wow!"

Eric Berger at Ars Technica (and @SciSpaceGuy on Twitter) pointed out:

Finally, there can be no question that inviting Shatner to fly as a guest on just the second human flight of New Shepard is a marketing ploy. This mission lacks the novelty of the first crewed flight—carrying Bezos—and interest would otherwise have been low for sending two millionaires (Chris Boshuizen and Glen de Vries) and Blue Origin employee Audrey Powers into space for a few minutes.

I asked Twitter followers on Tuesday whether they thought the spectacle of flying Shatner to space was more "marketing" or more "marvelous," and by a three-to-one margin they voted for "marketing." 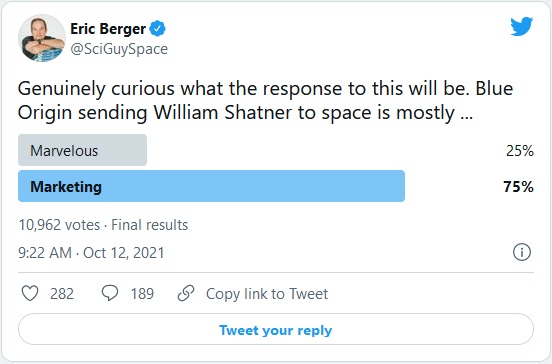 As someone who has written about space for decades and watched most episodes of most Star Trek series, I would say that flying Shatner into space is marvelous marketing. This flight does not solve any of the problems at Blue Origin, which are substantial. Due to poor management, the company has under-delivered. But Captain Kirk is finally going to space, and it's thanks to Blue Origin and Jeff Bezos.

There are a lot of things to be upset about in the world today, but sending Shatner to space, after he's delivered so much joy to so many for so many years, is not one of them.

Note that Berger said Shatner flew "as a guest" today; I take that to mean that he didn't pay but was given the flight by Blue.  I've read that Jeff Bezos is a big fan of the Star Trek worlds and especially Captain Kirk.

On the scale from utter contempt to unrequited love for William Shatner, I come down kind of neutral.  He's clearly no Lawrence Olivier, but he played fun roles and was entertaining.  The only thing I want from the dancing monkeys I hire is to dance better than I can.  It's not a high bar to get over.  I'm happy for Bill.  Qapla', Kirk!  chay' jura'?