I concluded the last report by saying I was going to sand the journal to get it down to the final size, using the plastic sticks I had made to hold the sandpaper.  It had been filed down to a bit oversized and I used the plastic sticks with 220, 400 and 1000 grit to finish.  The final size of the journal varied from 0.3751 to 0.3752", or within 1/10,000 of an inch over its length.  Since I make the other side of that matching pair, the piston, that should end up being easy to live with.

I didn't get as far as I wanted to because I continued to dump hours into troubleshooting the odd printer problems I spent days on last week, but I was able to make progress on the crankshaft.

Once I had let it sit for a day, and measured it another few times, the next task is to take off the extra metal around that journal and prepare it for turning the rest of the bar down to its final size (also 0.375").  I did that on my bandsaw and didn't take any pictures until it was done and put back on the lathe.  Which is when I realized I had problems with the tooling. 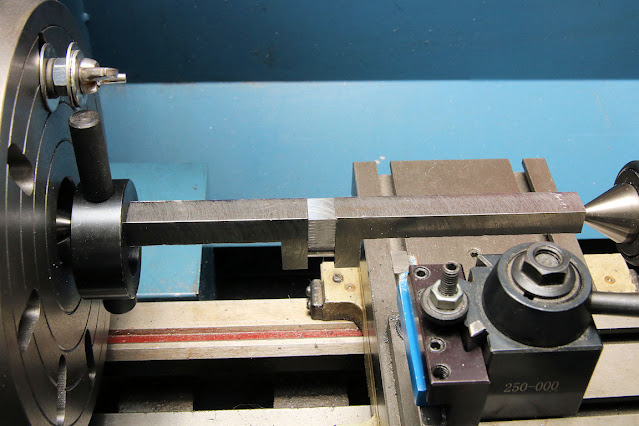 The problem?  Look at the top left of the picture where you'll see a kludge of a bolt, a wingnut, two washers (to increase diameter) and a hex nut.  That was because the system I bought from Little Machine Shop offered a bolt for that radial slot in the plate, but the bolt was at least 1/4 inch above the end of the rod it needed to be pushing.  I replaced that M8 (metric) bolt with a 5/16-18 bolt from my stash, going through a couple of lengths before I found one that work for the job.

While that worked, and I skinned back the side of the "cheek" holding the journal, I thought it felt flimsy enough that it was worth making a replacement tool.  My first thought was an L-shaped bar that would replace the hex nut and stick down far enough to push on that steel bar (the lathe dog's tail?) and be more secure.

I had two rectangular (steel) bars that used to be the other half of that crankshaft blank, and cut down one to make the reinforcing piece in the middle of the shaft (visible just above the rounded journal above).  I tried to think of how that leftover piece could work and couldn't see a way.  So I took an inch off the end of a 3/4 x 1" wide steel bar I had and made the tool from that.  (The reinforcing block is there to keep the pressure on the ends of the crankshaft bar from bending it around the journal - it's epoxied in place while I work.) 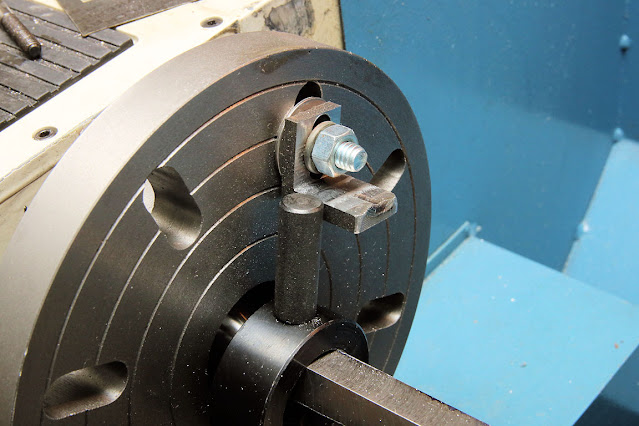 There's not much adjustment range, you can see the adjustment slot just above the nut and washer, but it's about 1/2 or 5/8" long.  It feels more secure than the stacked washers.

So with that in place, it was time to start turning down the rectangular steel bar and making it round.  It's far from done, but I took this picture at a convenient stopping point yesterday. 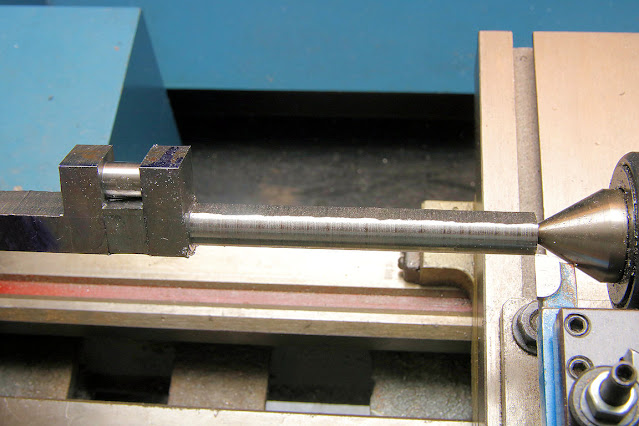 The top side of the bar here is flat from the saw cut.  I think the numbers tell me that it ends up circular before it reaches final size, but I have to admit I'm sweating it a little.

Both ends are too long and will be cut to final size.  Both sides should have had enough extra material coming off the (manual) cut on the bandsaw.

Operations left to do:

Posted by SiGraybeard at 5:03 PM