Too Hard to Categorize

A couple of odds and ends that don't go together and don't go with anything else I see in the next few days to create a coherent post.  Coherent post?  Why should I start now?

First:  during all the talk of tax reform, and the idea that "your tax return will fit on a postcard" there's a trap to keep an eye on.  Fix your study on reform: rates, deductions, and the hard stuff, not simplification.  The simplest tax return there is can be done in two lines:

Second: amid the talk of Blade Runner 2049 being a disappointment at the box office, Mrs. Graybeard and I went to see it last Friday.  Other bloggers (ASM826 @ Borepatch comes to mind) saw it and said they thought it was visually beautiful but too long.  Nobody that I read said it was bad or not to waste your time.

I agree that it's visually stunning.  It may be the most visually stunning movie I've ever seen.  The design of the futuristic dystopian world they create is really incredible.  It's literally world creating, not set creating.  The sets - however much is CGI and how much is carpentry and paint I can't say - are simply amazing.  If this doesn't get academy awards for cinematography and sets, I can't understand. 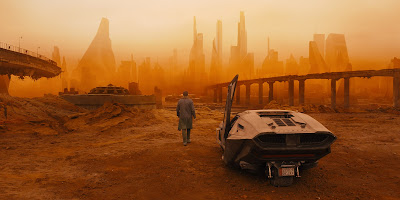 A small sample of the world building I refer to.

It's not going to be on the big screen much longer, if you want to see it at it's best, you best get going.