The Two Conflicting Stories of the Las Vegas Shooting

Last Friday, the generally insightful and funny Mark Steyn was on Fox and Friends and told a story of a contact he had.  Mark Steyn narrates from his web site:


On Friday morning I started the day on the curvy couch with "Fox & Friends" to discuss the latest developments in the Las Vegas attack and the Democrats' push for "gun control". The perpetrator of the deadliest single-shooter massacre in US history is so unlike his predecessors that it seems to me that nothing in his history is coincidental: there is a reason for everything, even if we will never know it - all the way down to, for example, such peripheral details as the fact that he owned property in both Mesquite, Nevada and Mesquite, Texas.

It is also interesting to note that Stephen Paddock apparently cased the "Life is Beautiful" concert in Las Vegas, headlined by the rapper Chance. The victims at that event would have been very different from those at the country music festival, and the press coverage would have been, too: Democrats would have stampeded down the "white supremacy" track rather than "gun control". One senses that the killer, in his cold calculations, was aware, for whatever reason, of all these factors.

Among the many emails I've received is this one, from a gentleman at a London think tank whose job is to focus on "the analysis of economic and political issues and outcomes".

Mark then outlines the case this "gentleman at a London think tank" proposes as Paddock's motive.  The think tank guy proposes that Paddock deliberately conceived and executed the attack to cause the focus on gun control.  I'm going to excerpt parts of it and then tell you why I disagree.  I think there's an alternative explanation that's just as plausible.


The fact pattern in this event is striking for not fitting any known profile. In particular:

The gentleman concerned had no known political or religious affiliations.

The level of premeditation is unusual and crystal clear from his mass buying of guns and the cautious systematic smuggling operation to ferry them to his room together with the illegal modifications and the position of the room he chose and occupied for several days beforehand.
...
This man amassed (rough figures) 24 guns in the hotel and another 19 at his home - 42 guns in total. He spent some $100,000 on buying them. The guns at his home are one thing but he also spent days filling his hotel room with more weapons and ammunition than he could ever conceivably use along with an array of advanced modifications and accessories.

Everything brand new. And very expensive. And mostly entirely redundant. Representing in effect an enormous waste of money and time and risk.

Except that is in the realm of generating massive publicity. Guaranteed massive publicity.
....
this gentleman did not simply fail to leave behind a motive; He took substantial trouble to ensure that no motive could be found - or attributed to him. All of which can lead us to only one conclusion:

It has been said that 'the medium is the message'.

In this case that is the literal truth. There is only one plausible motive for what this man did. And here it is:

This man wished to telegraph to America in graphic form the hard irrefutable evidence that guns and gun ownership and the ease of gun purchase in America are an evil and must be controlled.  On that hypothesis everything now makes sense. ... [emphasis added - SiG]

The second problem I have with the argument leans on the first: the author reaches this conclusion because the author already thinks America needs more gun control.  The author is imposing his own agenda on Paddock.

Perhaps Samuel L. Jackson wouldn't mind giving us a good quote to wrap this up tonight. 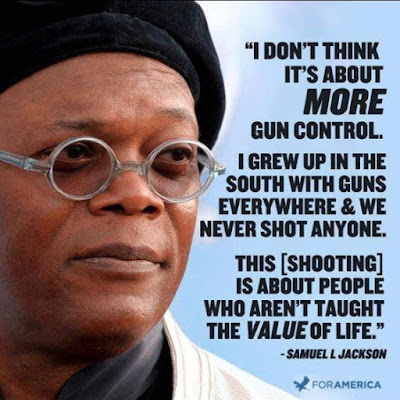