Us.  Not a superhero; you, me and everyone around here who knows how to do stuff.

According to Zero Hedge, Home Depot suddenly realized that they were having to hang their business on the millennial generation and few of them knew how to use the products they sell.


While avocado resellers like Whole Foods only have to worry about creating a catchy advertising campaign to attract millennials, Home Depot is in full-on panic mode after realizing that an entire generation of Americans have absolutely no clue how to use their products.  As the Wall Street Journal points out, the company has been forced to spend millions to create video tutorials and host in-store classes on how to do everything from using a tape measure to mopping a floor and hammering a nail.

Home Depot's VP of marketing admits she was originally hesitant because she thought some of their videos might be a bit too "condescending" but she quickly learned they were very necessary for our pampered millennials.


In June the company introduced a series of online workshops, including videos on how to use a tape measure and how to hide cords, that were so basic some executives worried they were condescending. “You have to start somewhere,” Mr. Decker says.

Lisa DeStefano, Home Depot vice president of marketing, initially hesitated looking over the list of proposed video lessons, chosen based on high-frequency online search queries. “Were we selling people short? Were these just too obvious?” she says she asked her team. On the tape-measure tutorial, “I said ‘come on, how many things can you say about it?’ ” Ms. DeStefano says.

As if to underline things, Zero Hedge posts the Home Depot "How to Use a Tape Measure" video.  Let me tell you: it's not a new phenomenon.  Around 1980, I was running the Quality Assurance department in an electronics factory.  I was amazed that adults in my group, 20 or 30-something women for the most part, couldn't read a ruler.

My first thought when I saw this was, "it can't just be Home Depot; what about all the other companies that cater to Do It Yourself crowd"  What about all the companies for home woodworker's tools?  What about the tool importers?  Sure enough, they report that Scotts Miracle-Gro Co. has started offering gardening lessons for young homeowners that cover basic tips—really, really basic—like making sure sunlight can reach plants.


Companies such as Scotts, Home Depot Inc., Procter & Gamble Co. , Williams-Sonoma Inc.’s West Elm and the Sherwin-Williams Co. are hosting classes and online tutorials to teach such basic skills as how to mow the lawn, use a tape measure, mop a floor, hammer a nail and pick a paint color.

To be honest, this doesn't seem like that big of a difference.  For a long time, up until about '09, Home Depot's slogan was, "you can do it, we can help" and they regularly had classes in how to build a deck or put down ceramic tiles.  It seems they're starting a bit lower on the skills ladder, but they've always been in the business of helping the average guy buy their products. 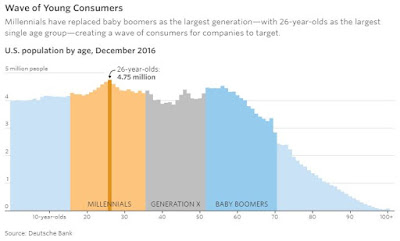 Millennials are naturally the group that Home Depot and other retailers have to appeal to.  It's almost an iron law of demographics, that people spend more in their mid-20s to mid-30s than older populations do.  When a couple is just getting started, they spend more on getting into a house, spend more on fixing it up, spend more on many things than older people.  This slows down for a couple in their 40s to 50s because the older couple is more likely to have already spent their money making their nest they way they like it, or they don't have as many things left they want to spend it on.  Older still, and they're more likely to be deliberately down sizing in preparation for retirement. 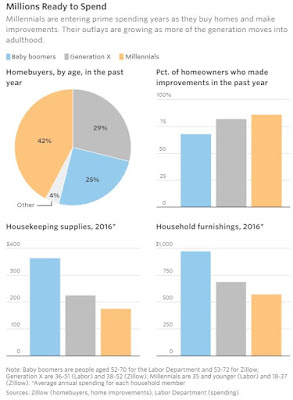 The data here are a little surprising.  As I expect, homebuyers by age tilt heavily toward the millennials; the percentage of homeowners who made improvements in the last year also tilts toward them, but not as strongly.  The other two plots: housekeeping supplies and household furnishings tilt exactly the opposite way, showing a strong lead to boomers, and I just don't expect that.

Where I planned for this at the start is how we as people who do things can help.  Whether you're repairing your own car's - or lawn mower's - engine, pouring your own concrete, building a backyard deck, welding, or repairing household appliances, you know more than someone who knows nothing about it.  We can help teach.  Zero Hedge linked to an older article on their site full of ideas for things to learn.  I bet between us we've got it covered.