One Step Closer to "Real Steel"?

The 2011 Hugh Jackman movie, Real Steel, was a fairly predictable story about a "struggling promoter" of robot boxing who takes a gamble on a "discarded robot".  It includes the obligatory cute kid we want to root for as Jackman's son; Jackman's character is a "rough guy with a heart of gold"; a fight scene against the champion; and the beautiful friend who's sort of a romantic interest.  (I could go into details about the actors in this movie from the Marvel Cinematic Universe, but I'll leave that lookup to those who care about such things.)

The main idea in Real Steel is that boxing between humans has become obsolete, and the audience (read "gambling") follows robots.  It turns out that might be closer than I thought.

NPR reports that an American robotics company challenged a Japanese robotics company to a duel - to be fought by robots the two teams create.  The fight has already occurred, and might even have been broadcast by streaming video already.


This long-awaited match between the monstrous robots — built by MegaBots Inc. of the U.S. and by Suidobashi Heavy Industry of Japan — will be broadcast on Tuesday via the online steaming site, Twitch. It's billed as the "first ever giant robot fight."

"This is a personal dream of mine come to life," says engineer Gui Cavalcanti, MegaBots' co-founder. Cavalcanti tells Morning Edition host Rachel Martin that it was both "awesome" and "terrifying" to co-pilot the 16-foot-tall, 12-ton robot – named Eagle Prime – during the duel. Cavalcanti, and his co-pilot Matt Oehrlein, were actually inside the robot controlling where the robot went, what its legs and arms did, and deploying its weapons. 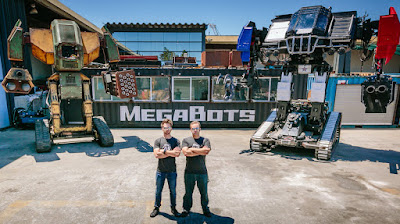 Unlike Real Steel, in which the robots are controlled from the sides of the rink, in the Real Life version the fighters are inside the robots.  Think of another movie, Pacific Rim where the giant robots were piloted by a team of two as they fought the invading monsters from another dimension.


"We're sitting on top of 430 horsepower Corvette engine," Cavalcanti says. "You can actually feel the robot just kind of shaking and quaking around you as you get punched, as you lean into a turn, as you fire the weapons or throw a punch."

Wait... weapons?  The article just says, the robots "can be outfitted with a range of weapons from cannons to a chain saw".

Much like the movie,  Cavalcanti says this is about more than just a giant robot fight and a battle for technological superiority.  He says their goal is to form a new giant robot sports league and turn it into the next arena and stadium sport.