As Daylight Saving Time Ends, Some Plan an Exit Strategy

Next week is the weekend we all "fall back" and go back to standard time.  As DST ends, though, some New England states are looking for a way to eliminate DST and stay on one time zone all year long, according to a story at The Weather Channel.
Frankly we hear this sort of thing every year at the start and end of DST, so I don't give it much chance of happening, but I've never heard of the approach of going one time zone forward.  That's equivalent to staying on DST all year long from the standpoint of being in the Eastern time zone.  They'd "spring forward" once and stay there forever  TWC links to an article on Quartz and I'm going to bounce back and forth between them.


There are well-documented costs of changing clocks each year, including car accidents and heightened stress. Not every country, or even state, observes twice-yearly time changes, and those that do, change clocks on different days. It creates a semi-annual state of chaos.
...
Written by public health advocate Tom Emswiler, he argued that the 99-year-old tradition should go by the wayside, at least in New England, because sunsets at 4:15 p.m. aren't just inconvenient – they're negatively affecting business. For one, Daylight Saving Time is a farming-driven idea, and with so few farms in New England, there isn't much need for the time change. Secondly, Emswiler said the early sunsets might drive college students elsewhere to areas where it's not dark by 4:15 p.m. in the dead of winter.

I've also seen articles written by farmers who hate DST as much as anyone and say they have no particular use for it either so don't blame it on them.  In fact, the idea that it was for the farmers is just part of the mythology behind DST, at least according to Popular Science Editor Rachel Feltman, writing in the Washington Post on "5 Myths About Daylight Saving Time".


In fact, the inverse is true. “The farmers were the reason we never had a peacetime daylight saving time until 1966,” Downing told National Geographic. “They had a powerful lobby and were against it vociferously.” The lost hour of morning light meant they had to rush to get their crops to market. Dairy farmers were particularly flummoxed: Cows adjust to schedule shifts rather poorly, apparently.

It's unavoidable that we'll face longer days in the summer and shorter in the winter.  That change in sunlight hours is part of the change of seasons  caused by the 23.5 degree inclination of Earth's orbit.  I'd guess that most of us have traveled enough to notice that day and night length vary with latitude at any time of year, and it gets more extreme the farther toward the poles you go.  Here in the southernmost reaches of the US, (I'm not in the tropics - none of Florida is) we have less variation.  On the summer solstice, our day is just short of 14 hours long - 13:55:30.  On the winter solstice it's 3 hours 34 minutes shorter, 10:21:43. (source)  In Minneapolis, MN, the longest day lengthens to 15:36:48 - just over two hours longer, and the shortest day shortens down to 8:46:12, virtually seven hours shorter than their longest day.  Nothing can be done about that.  All DST does is change what we call those hours. 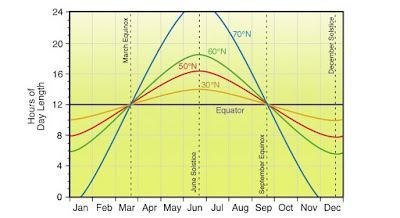 (Day length vs. Latitude for the year.  Source)