Voyager - Looked at From My Home Turf

We talked about Voyager in August, as the farthest objects mankind has ever launched, and the first manmade objects to leave the solar system.

Likewise, I know I've said I retired from a career as an RF (Radio Frequency) engineer, so communications links, like the two Voyagers' links back to Earth are what I spent most of my life doing.  It's my home turf.  We still have contact with the two probes yet their signals are astonishingly, mind-blowingly weak.  Microwaves and RF magazine editor Lou Frenzel reminded me of some of these things in a piece this Tuesday.

One of the fundamental problems in communications links is that the signal strength falls off as an inverse squared relationship (1/Distance(squared)).  We use the term path loss to describe how much signal is weakened by this effect.  How much loss is there for Voyager 1's signals?  The number is astonishing:


The free space path loss is computed with the expression:

Here, f is the frequency in MHz and d is the distance in miles. The Voyager 1 used two frequencies, 2.3 GHz in the S band and 8.4 GHz in the X band. Using the lower frequency and the previously estimated 13 billion miles distance, the path loss is:

The next thing we need to do is determine how much signal gets here in power units.  The transmitter on Voyager 1 delivered 23 watts to its antenna at some point.  Whether it does now or not, I can't answer.  It's common for receiver designers to refer to powers as dBm, that is, powers with reference to a milliwatt, 1/1000 of a watt, in 50 ohms.  If that transmitter is still delivering 23 Watts, the power would be expressed as 43.6 dBm.  To be my pedantic, some-would-say AR self, a dBm is a power; a dB is a ratio of powers.

Here is where you find out why we always work in dBs: it turns multiplication and division into addition and subtraction.  We find the power at earth by subtracting the path loss from the power output. 43.6 -306.6 = -263 dBm.  Again, an astonishingly small signal.  For VHF or HF radios that most hams or hobbyists have, they're concerned with signals around a microvolt; millionth of a volt.  Perhaps 0.5 microvolt.  That's -113 dBm, 150 dB stronger than Voyager 1's signal; 1,000,000,000,000,000 times stronger.

The other fundamental problem in communications links is that there's an inherent limit to the strength of a signal we can receive, and that is set by the inherent thermal noise of our components.  If you were to put a 50 ohm resistor on a bench and measure the power it produces from just being at room temperature, you would find it produces -174 dBm.  Much lower than the -113 dBm above, but still far, far stronger than the -263 dBm from Voyager.  Perhaps you've heard of radio telescopes being cooled by liquid helium to almost absolute zero?  This is why.

How can we possibly handle signals that much weaker than the thermal noise?  We get apparent amplification out of antennas, also called antenna gain, on both ends of the link.  Voyager's antenna itself gives 57 dB gain.  (Antenna gain is worthy of another article itself).


At the receiving end of the link is one or more big dishes. There are several large antennas at NASA’s Deep Space Network stations, such as Goldstone in the U.S., Canberra in Australia, or near Madrid in Spain. There are six antennas—one 26 meters (85 ft), four 34 meters (112 ft), and one 70 meters (230 ft)—each having super cooled front-ends for low noise. Using the 70 meter Goldstone dish gives the signal an 82 dB boost. The antennas can also be arrayed to produce more gain and improved reception.

One last concept to introduce; that the noise we get depends on the bandwidth we measure in.

P = kTB
where k is Boltzmann's constant, T is temperature in degrees Kelvin and B is the bandwidth in Hz

To really fill in those numbers, I need to know things I don't know, in particular, the modulation scheme used by Voyager and the temperature of their "super-cooled front-ends", but it passes a rough sanity check.  Lou Frenzel says Voyager is transmitting 1000 bits/second or so.  I'll swag a bandwidth of 1500 Hz and say I'd need a signal of -136 to decode Voyager, if the data modulation is similar to others I worked with in the early '80s.  So it looks like we can receive Voyager with some margin to spare. 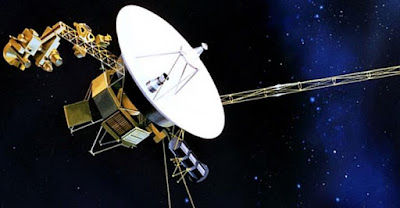 Hope y'all enjoyed a little trip around the old block for me.