Another A380 Loses an Engine in Mid-Flight

By now, everyone has heard about the Air France A380 flight yesterday that had an engine break up in mid-flight over the North Atlantic (one report says over Greenland).  The aircraft declared an inflight emergency, was re-routed from its path to Los Angeles and landed safely at Goose Bay airport in Canada.  The pilots handled the emergency well and the plane landed without further problems. 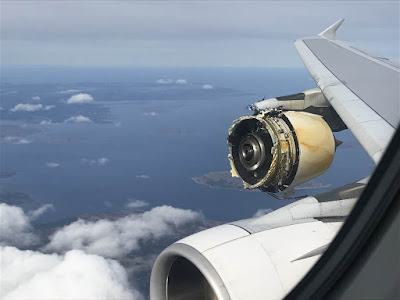 The thing is, this isn't the first engine issue they've had, on an airframe that hasn't flown that long.  Soon after the A380s were delivered to Qantas airlines in Australia, 2010, one of their A380s lost its port side inboard engine to an explosion on takeoff.  The engine threw debris through the wing of the aircraft and could have just as easily thrown debris through passengers.  The pilots handled the emergency expertly and safely landed the aircraft.  The cause was judged to be a quality problem at Rolls Royce Trent engines, and resulted in grounding of several aircraft, including among different airlines to have engines inspected or replaced. 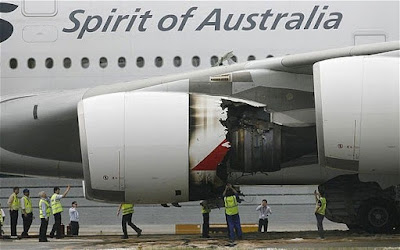 Are two midair engine explosions in seven years unusual?  That's a little awkward to answer because if you search for any model aircraft, you'll find stories about engine explosions.  Despite that, I'm sure that everyone in the design chain does their best to make sure they don't explode.  Is it worth asking if the A380 system has some issues with its engines?  Not so much that the engines aren't built right, which was the case with the Qantas incident, but if there's something about their operating envelope that wasn't adequately specified?  What I mean is that the engines were specified, designed and then tested to a specific set of requirements, so I'm sure they meet the requirements.  Is it possible that the requirements are wrong?

It's rough for outsiders to the industry to find real numbers for the number of flight hours, failures per flight hour and so on.  We always have to keep in mind that if two very rare occurrences happen in rapid succession, they might legitimately still be very rare.  People do hit the lotto twice.  It does, however, make me want to keep an eye on the A380 from a respectful distance.